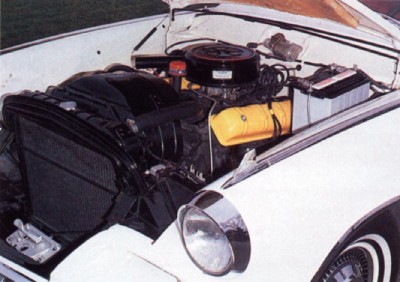 Under the hood, the Studebaker Gran Turismo Hawk's Thunderbolt engine was a stroked version of Studebaker's old reliable 259.2-cubic-inch V-8. Displacing 289 cid, it churned out 210 horsepower with a two-barrel carb, 225 with the $22 four-barrel-carb option. (The 259 V-8 with 180 or 195 horsepower was available on export models, as was the old straight six.) Although a three-speed manual gearbox came standard, a floor-mounted four-speed and Flightomatic automatic were offered, as was overdrive. Finned-drum brakes, variable-rate front coil springs, anti-sway bar, asymmetrical rear springing, and telescopic shock absorbers were standard.

Overall, the car looked and felt like a high-speed four-passenger European Grand Touring car. The auto magazines praised it; Motor Trend, for example, described it as "a willing and able car definitely in the tradition of the high-speed tourers of Europe."

Stevens had begun the Hawk project in March 1961. To everyone's amazement, the elegant black handmade prototype was delivered to Studebaker headquarters in July. What would have taken GM or Ford two and a half years to do, Stevens had accomplished in a matter of weeks.

The Gran Turismo changed very little in appearance during its three-year run, showing only slight alterations of the front grille, rear decklid treatment, and interior. People not familiar with the differences can learn to tell them apart by the hubcaps: stainless and black in 1962, a white center surrounded by a white ring in 1963, and similar to Avanti's in 1964. The 1964 model deleted the decorative overlay on the trunklid and most sported the optional half vinyl roof -- the vinyl being applied forward of the ridge. The Gran Turismo was the first production car with a half vinyl roof, a treatment that was widely copied and is still available on some cars.

The biggest news in year-to-year changes showed up under the hood. In 1963, the surprisingly fast Avanti debuted, and the Hawk benefitted from the engine work done for that car. Two hot versions of the 289 were offered: the 240 horsepower R-l, and the McCullough-supercharged 290 horsepower R-2. Although the superchargers are sometimes called Paxton, they are one and the same, being named after Robert Paxton McCullough. By this time, Egbert thought of the superchargers as being so much a part of Studebaker that he had the company buy that part of McCullough Motors.

For 1964, a 304.5-cid engine theoretically became available. A stroked version of the 289, the R-4 version boasted twin four-barrel carbs and 280 horsepower. The supercharged R-3 cranked out 335 horses. Although listed, no Gran Turismos were factory built with either engine. Still, the 120-mph speedometers on the Hawk were changed to 160-mph units at mid-year to enhance Studebaker's performance image.

To maximize the Gran Turismo's exposure, Stevens campaigned a Hawk-based race car. At his Excalibur works, he had a tubular frame built and installed a blown engine and Gran Turismo components. Labeled the Excalibur Hawk in proud chrome letters on the front fenders and sporting Hawk emblems on its chromed roll bar, this unique car did quite well on the racing circuit. Using a more conventional form of the production 1963 Hawk R-2, Andy Granatelli (by then vice-president of Studebaker's supercharger division) made 140-plus-mph runs on the Bonneville Salt Flats. His record runs with the similarly equipped (and Stevens-designed) Lark Daytona model also brought in much needed publicity.

Studebaker was finally ready to show off their new automobile. Read about the reaction to the 1962 Studebaker Gran Turismo Hawk on the next page.