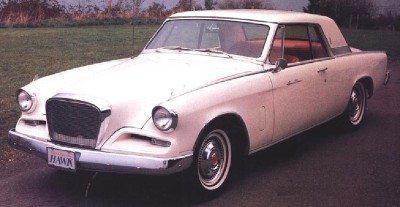 In the rear of the 1962 Studebaker Gran Turismo Hawk, the taillights were visible from the side as well as the back, again hinting of the Lincoln Continental. They featured built-in backup lights and flanked a purely ornamental mesh grille treatment on the decklid. The radio aerial was mounted in the center of the leading edge of the decklid. The rear window sported inset glass, a Stevens trademark seen earlier on some of his creations for Willys.

The hardtop roof borrowed its shape from the Thunderbird: squared, flat, and with wide sail panels. In abandoning the pillar-type rounded roof seen on previous Hawks, Stevens was able not only to increase headroom for rear passengers, but to give the Hawk a roofline then very much in vogue.

The Hawk emblem, with wings upright, flew on the sail panel above a wide strip of embossed chrome. There was one major difference on the Hawk's greenhouse, however: it sported a ridge across the top of the roof from sail panel to sail panel, creating a form akin to earmuffs. Here, Stevens was looking ahead. He suggested that dealers might paint the front part of the roof silver, thus creating an open effect.

In his drawings, Stevens went a step further. He proposed a sliding panel that retracted into the earmuff section for a semi-convertible effect. Unfortunately, the Targa-like design would have required substantial body and frame bracing. That meant money and additional engineering time. There was neither, so the idea was abandoned.

This sketch shows what the demi-convertible Gran Turismo Hawk would have looked like.
©2007 Publications International, Ltd.

The interior of the car spoke of understated elegance. The driver found everything in the right place, like the large and legible instruments that were mounted on a splendid vertical three-plane panel that pointed the gauges at the driver. One owner said he bought a Gran Turismo because he couldn't afford a Continental Mark II, but later when he did buy one, he didn't keep it long -- he preferred the superior and more practical interior of the Hawk.

For the first time ever, an inner cowl was made of fiberglass. Here necessity had been the mother of invention, for Stevens wanted that distinctive dashboard. Because of the low production projections for the Gran Turismo, this expensive component was fabricated in fiberglass to save tooling costs. Structural components were designed into the cowl. The mounting of the dash padding was, in part, facilitated by the use of fiberglass.

Both a clock and a tachometer were optional. Non-glossy simulated wood surrounded the instruments, the appliqué having been printed through an arrangement with Egbert's friend at Automobile Quarterly. An aircraft-like panel of perforated bright metal continued to the right across the dash, cleverly concealing the radio speaker. It gave a "mechanical" look to the interior and flowed into the door panel. The doors sported a red, white, and blue accent strip between armrest and window. Both the three-plane dash and the use of luxurious carpeting on the doors were later copied by Ford and GM.

Perforated acoustical vinyl was used for the headliner. The buyer could choose between cloth or ribbed vinyl for the inserts in the over-size bucket seats (reclining buckets and seat belts were optional). Unfortunately, the vinyl used on the 1962 model had been stamped too deeply and didn't wear well. In the rear, a pull-down armrest added extra comfort.

The Gran Turismo Hawk's engine was a major selling point for the car. On the next page, read about what went on under the hood of the Hawk.