Financial Problems at Studebaker in the 1960s 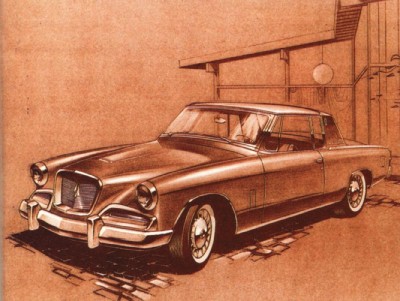 The Gran Turismo Hawk was a great innovation, but people wondered why Studebaker felt the need to change it for 1962. By 1961 the Hawk was six years old, and largely unchanged style-wise. And from 1959 to 1961, the Hawk was promoted as a low-price pillared coupe, forsaking its place in the personal-luxury market.

Then, too, problems at Studebaker-Packard had driven some respected designers -- Duncan McRae and Bill Schmidt -- to do things to the Hawk that never would have been done under normal conditions, one result being the 1958 Packard Hawk.

For the Studebaker Hawk, a continued penny-pinching effort to change it a bit here and a tad there kept alive the hope that any change might promote sales. Performance-wise, however, the car held together and there were loyal buyers, albeit not enough.

Financially, Studebaker was in turmoil. The remedies tried in the late Fifties by corporate president Harold Churchill weren't working. Sales and morale were low, productivity abysmal. Compounding the problems were the New York money men who had gained power on the board of directors.

Schemes for the manipulation of tax credits and plans for Studebaker's exit from the automobile business in favor of some of its more lucrative holdings were continually being pushed by board members, especially Abraham M. Sonnabend. Studebaker had seven divisions then, including an airline and an appliance manufacturing plant.

In this climate, board chairman Clarence Francis retained the Beyden executive talent firm to find a young man on a white horse to run the company. A board meeting caused Sonnabend to cancel a European trip as he believed he was about to be named president. Had he been, he would have quickly terminated auto production. But at the end of the stormy six-hour meeting, Sherwood Harry Egbert, age 40, emerged as president, and at double Churchill's salary. Through Beyden, Francis had arranged a five-year loan of Egbert from McCullough Motors.

This May 1961 rendering of the Gran Turismo Hawk shows the earmuff over the rear of the roof and the rocker panel trim that was ultimately extended from wheelwell to wheelwell.
©2007 Publications International, Ltd.

Under Egbert, car production was to continue -- for a while. South Bend was elated, and Egbert was indeed treated like the man on a white horse. Banners blasted out: WELCOME SHERWOOD EGBERT. Everyone was full of hope, and it seemed well founded.

The imposing six-foot-four Egbert had been grabbed by Robert P. McCullough after he left the army as a captain. McCullough saw in him the makings of a brilliant corporate executive and groomed him for big things within the company. McCullough was right -- Egbert did the right things at the right times, and with great skill.

Brooks Stevens was a recognized industrial designer of three decades standing. As such, he had a clear vision of how to go about creating the 1962 Gran Turismo Hawk.

Egbert had no intention of ceasing auto production -- he loved cars. Besides, Studebaker had contractual agreements with its dealers to supply cars and parts. If it didn't, the corporation would open itself up to monumental lawsuits. The choices were to either slip out of the car business in just the right way, or to raise auto sales to a profitable level.

On the next page, read about designer Brooks Stevens and how he created the Gran Turismo Hawk.