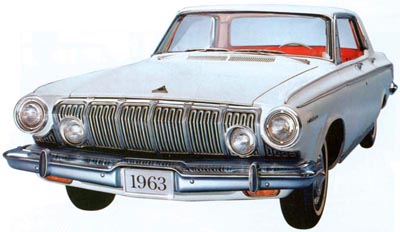 Extensions of the vertical grille, an Elwood Engel touch, didn't survive into the start of full series production.

Elwood Engel was quite pleased with the styling of the 1963 Dodges. But the new Chrysler vice president of design did mandate some minor changes for the first model year under his watch, including the 1963 Dodge B-Body cars. To add more brightwork to the front of the 1963 Dodge B-body cars' trim, the body-color grille frame was changed to anodized aluminum. To create the illusion of more width, Engel added triangular diecast extension pieces to continue the grille texture beneath the outer headlamps.

Although most of the cars in Dodge's 1963 press photos sport these extensions, they never made it to production, probably because they couldn't be made to fit right.

The surviving 1963 Dodge Polara 500 two-door hardtop and convertible again wore a prominent color sweep located above the bodyside "shoulder," running the full length of the car. Bright sill and wheel-lip moldings; a bright, ribbed quarter-panel appliqué that visually extended the wraparound of the rear bumper; and a horizontal extension of the bright drip molding along the base of the C-pillar completed the 500's unique ornamentation.

While the side trim remained specific to the Polara 500, front and rear views lost their unique details. Inexplicably missing was the grille blackout that had provided an exclusive look in 1962. Though blacking out the vertical bars in the six-segment grille of the 1963 would have been a natural, Engel apparently didn't favor such treatments. Out back, rectangular lights were set into a carwide bright die-cast frame enclosing the license plate. On either side, a horizontal lens was divided between taillamp and backup-light functions.

This treatment was shared with a revived Polara series that included four-door and station wagon models. Thus, although the side trim on the Polara 500 remained unique, from other angles, the 500 appeared no different from a standard Polara hardtop or convertible. With ordinary Polaras in the lineup, the 500 appeared to be a mere trim variant.

At the press previews, Dodge general manager Nichols bragged that "We believe that the 1963 Dodge has been engineered and styled so that it meets completely the needs and desires of a majority of American car buyers," while Chrysler president Lynn Townsend described the new Dodges as "all-purpose, full-size, representative American family automobiles."

Both men were right. As 1963 progressed, Dodge dealers began smiling again. The new compact Dart was a big hit and the big 880s accommodated the older crowd.

But the dealers were most pleased with the restyled and enlarged B-bodies. These were cars they could successfully sell right up against Chevy and Ford; they could even reel in Plymouth customers, given the Dodge's three-inch advantage in wheelbase. Further, they were covered by Chrysler's new five-year, 50,000-mile warranty, best in the industry. The new B-bodies were well received, with U.S. production increasing to 181,600 units for the model year.

The only sour note was that for some reason, Polara 500 assemblies dropped dramatically to just 7,256 cars. By contrast, production of Plymouth's comparable Sport Fury rose to 15,319 units. The price difference between a Polara 500 and a comparable V-8 Polara was $233, while the Sport Fury/Fury split was $158 -- but the 500 had a bigger standard V-8. Whatever the reason for this decline, it would not bode well for the 1964 version.