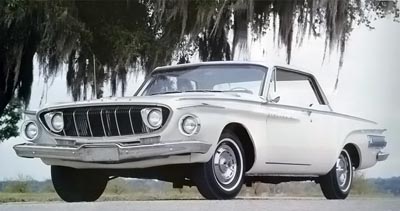 The 1962 Dodge Polara 500 was considerably smaller than its forebears, with a 116-inch wheelbase.

Into an uncertain milieu, with management shakeups hampering the design of cars, rode the 1962 Dodge Polara 500. The Polara name was fairly new to the Dodge lineup, having first appeared on the top series in 1960-1961, cars that were larger than the Darts and with some different styling details. It is unclear what Dodge planners originally had in mind for the Polara name in 1962, but in the end, it became a trim variant of the Dart.

That said, the Polara 500 was the most-attractive iteration of the 1962 Dart body, The exterior was pleasantly dechromed compared to Dart 330 and 440 models. The slightly flattened blade formation on the front door provided a surface on which Polara 500 could be spelled out in delicate individual chrome letters and numerals, a custom touch. The numerals were a none-too-subtle link with America's most revered automobile race, the Indianapolis 500.

The nearly chromeless flanks were accented by a narrow streak of color just below the belt, stretching from front to rear and outlined by slim moldings. The resulting color sweep was keyed to the color of the interior trim of the car. This treatment served as a continuous front-to-rear design element and inspired midyear imitations on the Dart 440 and -- in chrome -- on the Plymouth Fury and Sport Fury.

The Polara 500's other bodyside design "exclusive" wasn't as successful. The trailing edge of the rear quarter panel was accented by a series of bright louvers. Since similar louvers were also standard on the Dart 440, the Polara 500 had to have something "better." The stylists' solution was a long, bright, diecast rectangle enclosing chrome louvers fronted by the "fratzog," Dodge's new triangular, three-pointed emblem. Like the color sweep, the interior background of the rectangle was painted accent color. Unfortunately, the workout of this design element was heavy-handed; the car would have looked better without it.

Up front, Polara 500s could be spotted instantly by the blackout treatment given to the grille in which the narrower of the vertical bars were painted black, making the seven wider bright bars stand out. At the rear, each of the 500's four circular lamps were red taillamps. The back-up lights were relocated to a slim diecast band with a horizontal ribbed texture above the rear bumper. Finally, Polara 500s came with unique wheel covers, complete with protruding spinners -- "weed winders" -- in the form of large, chrome fratzogs.

Exterior and interior were carefully color-coordinated. Red, blue, green, cocoa, and black exteriors had beige in the color sweep and louver panel, while beige cars could be had with these same exterior colors in the sweep and louvers. Black cars could also be ordered with red or blue exterior accents. In each case, the predominant interior color was light beige, used on the seat bolsters, steering wheel, door-panel accents, and headliner.

A darker contrasting color was used on the instrument panel, door-trim panels, seat inserts, and carpeting. Thus, a blue car would have beige exterior accents and a beige interior with blue accents, while a beige car with blue exterior accents would use this same interior. The overall effect was striking, stylish, and sporty.