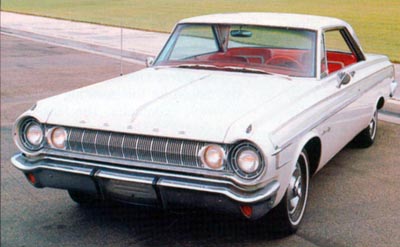 A convex "barbell" grille set the headlights side-by-side on the 1964 Dodge Polara 500.

For the first time since the 1961 model year, the 1964 design program was a normal one, free of corporate missteps, last-minute changes of direction, and panic. As the 1964 Dodge Polara 500 development went forward in the early months of 1962, Dodge stylists and engineers could relax, having only to work the usual amount of overtime. The 1964 design was also the first completely under the direction of Elwood Engel, giving him more opportunity to replace Virgil Exner's ideas with his own.

The program called for a classic Detroit facelift: a new front end plus a new two-door hardtop roof. Heading the styling activities as chief stylist in the Dodge studio was the late Bill Brownlie, who moved over from Plymouth during the development of the 1963s. Impeccably attired and always the gentleman, Bill nonetheless was a ardent competitor, always seeking a design "edge," that something extra that would put Dodge ahead of both Plymouth and Pontiac.

The front end sported new sheetmetal, including new fenders, hood, and cowl. The handsome new grille, designed by Dick Watson, cleverly employed a barbell theme. The outer, low-beam headlamps were emphasized by being set in oversize bezels, which in turn framed a full-width grille made up of vertical bars. The high-beams were recessed into the grille directly inboard of the lows.

The grille was basically a convex variant of the one that had been used on the 1962 Plymouths. Plymouth had walked away from the design in 1963, but Brownlie retained a fondness for the theme. The idea was so good that it was used on the all-new 1965-1966 big Dodges and even beyond that.

The new front bumper, the outer ends of which dipped obligingly under the outer lamps, reinforced the barbell theme. Much more substantial than the 1962-1963 design, the new bumper wrapped around the sides of the fenders for greater protection and possessed a deep skirt that now matched the rear. Triangular amber turn-signal lenses mimicked triangular inserts containing the Dodge "fratzog" emblem atop each fender. A satin silver-and-chrome casting on Polaras and 500s accented a concave, vee-shaped windsplit on the hood centerline.

At the rear, the new decklid outer stamping sported dual, raised wind-splits, accented by bright black-filled moldings on Polara/Polara 500. The rear bumper was also new, with a deeper skirt that eliminated the below-the-bumper body-color pan of the 1963. Dimensionally, the 1964s grew 1.6 inches in length and 1.5 inches in width, while the rear tread expanded 2.1 inches.

Above-the-belt changes included a new two-door hardtop roof. In 1962 and 1963, necessity had dictated that the sedans and hardtops share the same roof panels, but now there was time and money available for distinct designs.

Since the roof was to be shared between Dodge and Plymouth, a "bake off" was held between the two studios. One of the Dodge studio proposals was a much-modified variant of the original 1962 Plymouth "Super Sport" roof of which Brownlie was so enamored.

But the Plymouth studio's design won approval. It featured a wedge-shaped C-pillar that tapered to a narrow base, the pillar's surface broken by a subtle crease line. The lower portions of new angled backlite wrapped around to the pillars. Glass area on the 1964s was 1,275 square inches compared with 917 square inches in 1962-1963.