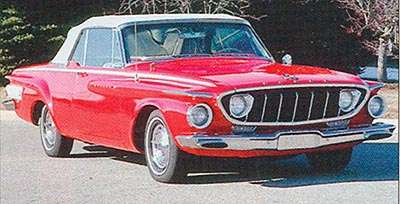 Items specific to the 500 for its class included special wheel covers, a blacked-out grille, and bucket seats.

Early in 1958, Ford Motor Company lit up the darkness with the introduction of the four-passenger Thunderbird, and this was the start of a class that would become the 1962-1964 Dodge Polara 500 competition. Beneath the Thunderbird's fashionable blind-quarter roof line was a stylish passenger compartment offering seating for four. Individual front bucket seats were separated by a floor console, with simulated bucket seating in the rear. It was the first of a new genre, the personal-luxury car, and the public loved it.

Pontiac offered buckets in its 1958 Bonneville, and one or two others dabbled with the concept. But the big breakthrough came with the 1960 Chevrolet Corvair Monza coupe. It boasted a handsome interior with smartly trimmed front bucket seats, creating a two-door personal-luxury car anyone could afford.

Like the T-Bird, the Monza was an immediate success. Despite a late introduction, 12,000 were built in 1960, rising to 151,000 Monza coupes in 1962. In the words of Ward's 1964 Automotive Yearbook, "It remained for Monza to send other producers rushing into the bucket seating market." By 1963, bucket seats were being installed in 16.7 percent of production, prompting Ward's to comment that the "installation rate for this type of seating is quite phenomenal, since it permits only two persons to be seated in front instead of three, meaning at least 1,000,000 autos being sold annually no longer are family cars."

When it came to offering bucket seating, Chrysler was a bit late to the party. The innovative swivel seats first offered in 1959 were almost buckets. In 1960, the limited-production Chrysler 300-F sported four individual seats separated by a full-length floor console. But it wasn't until 1962 that front bucket seats were offered in any of the corporation's popular-price cars.

While bucket seats were a critical component of the first Polara 500, other forces also shaped the car. The shuffling of the headlamps each year symbolized Dodge's frenzied struggle to regain sales equilibrium after a disastrous styling and product planning misstep during which the Polara 500 was born. The debacle of 1962 nearly crippled the division and its dealers.

A nearly final mockup from February 1960 wears the headlights and grille that became the 1962 Dodge look.

The star-crossed development of the Dodge and Plymouth for 1962 has been well documented, so a summary will suffice. Searching for the "next look" after fins, Virgil Exner, Chrysler's talented styling vice president, set about reproportioning the full-size family car, substituting a long-hood/short-deck silhouette for the Fifties' wedge-shaped fins. Another new key design element was the oval body section at the B-pillar. Patterned after the sleek, space-efficient fuselage of a jetliner, the new curved side glass merged slickly into the bodyside sheetmetals.

But while the 1962s were progressing, executive vice president William Newberg "discovered" in the spring of 1959 that Chevrolet was planning to downsize its full-sized car for 1962. Panicky that the cars Exner and the engineering department had under development were now too big, Newberg mandated that the new 1962 Plymouths and Dodges be downsized as well.

Since there wasn't time for a new design-theme search, Exner's existing Dodge and Plymouth clays had to be tailored to fit the new criteria. Wheelbase was cut back from 118 to 116 inches, the curved side glass disappeared, and width was reduced. Everything possible was done to cut size, weight, and cost. In this, Newberg was abetted by a cadre of Chrysler engineers led by Syd Terry, who, dismayed at the growth in size of American cars in the late Fifties, enthusiastically endorsed this smaller, lighter, "more rational" package.

At the meeting where the downsized 1962s were approved, an unhappy Exner was uncharacteristically blunt. "These cars are 'plucked chickens,' " he told the assembled engineers, planners, and executives. "They are not competitive and Styling should not be held responsible." Ultimately, of course, Exner was held responsible when Chrysler president Lynn Townsend replaced him in the fall of 1961 with Elwood Engel.