The Dodge Custom 880 was born in 1962 out of Dodge's need to restore a full-size car to its downsized model line. See more classic car pictures.
©2007 Publications International, Ltd.

The 1962-1964 Dodge Custom 880 restored a full-size car to Dodge's lineup. Downsized big Dodges seemed a good idea when Chrysler design chief Virgil Exner conceived them in the recession-wracked late 1950s, but they were literally bad business when introduced to the improved market of 1962.

Though medium-price cars still weren't selling like they used to, DeSoto's demise in late 1960 had left the Newport as Chrysler's sole entry in the still-important $3,000-$3,500 segment. Dodge dealers, suffering poor sales of their newly downsized 1962 "standards," screamed for relief.

They got it at mid-model year with a revived Dodge Custom 880. This was either the recently canned 1961 Dart/Polara with finless "plucked chicken" 1962 Chrysler rear, or a 1962 Newport with the peaked-fender 1961 Dart/Polara front. Actually, either conception is correct. Both 1962 Newport and Custom 880 used the 122-inch-wheelbase unibody platform found under all full-size Chryslers and Dodges since 1960.

Of course, that had also served the last DeSotos, which the Custom 880 essentially replaced. It was, after all, the same package offered at similar prices, but in more models with nicer looks.

Speaking of style, the old Dodge front mated remarkably well with the new Chrysler rear, but the combination was not the result of a hasty design decision. According to Virgil Exner, Jr., it had been proposed in an ornamentation drawing as a last-gasp effort for a 1962 DeSoto. Though shelved then, the idea was dusted off when Dodge's shrunken 1962 standards met sales resistance, which is how the Custom 880 got to market so quickly.

What Chrysler obviously did was abandon a lackluster nameplate (DeSoto) for a more saleable one (Dodge) without really changing the product. And the ploy worked every bit as well as the hybrid styling. Though the 1962 Newport saw over 83,000 sales, the Custom 880 generated a healthy 17,705 despite its six-month selling season -- important added business at a time when Dodge desperately needed it. 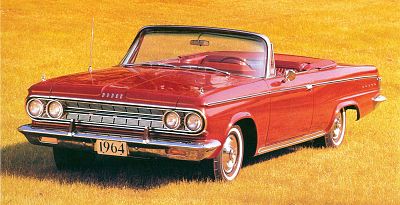 The 1962-1964 Dodge Custom 880 was built to fulfill a need to restore a full-size car to its downsized model and provided the spark when Dodge needed it.