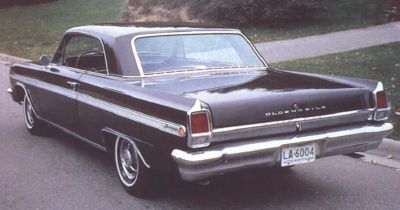 New styling made the 1963 Oldsmobile F-85 Jetfire look like a miniature version of that year's full-size Eighty-Eight hardtops.

Road testing a production Oldsmobile F-85 Jetfire with a Warner four-speed manual gearbox and standard 3.36:1 axle ratio in 1962, Car and Driver suggested that it "comes remarkably close to the European concept of a big car," yielding "spirited performance" along with Oldsmobile levels of comfort.

It was a bigger car for 1963. Though wheelbase was unchanged, a thorough restyling that added four inches of overall length and 2.1 inches of width made the Jetfire and its F-85 kin look more like scaled-down Eighty-Eights.

Still, 0-to-60 mph acceleration took just 8.5 seconds and a quarter-mile run was achieved in 16.8 seconds. The Jetfire topped out at 107 mph. "On a power-weight ratio basis," Car and Driver asserted, "the Oldsmobile F-85 Jetfire is a real winner."

­Handling had not improved, though. The magazine noted that the .875-inch antiroll bar "permits body lean to an extent that sporting drivers find objectionable." All told, the 1963 Jetfire "does not have steering, suspension or brakes in keeping with its guise as a sporting sedan."

At the same time, the Jetfire's ride quality, "even on the worst surfaces," was considered "soft enough to keep elderly housewives from getting alarmed."

Other flaws also marred the experience. "On anything but a highly abrasive surface," Car and Driver noted, "the Jetfire's maximum acceleration is defeated by wheelspin." In addition, "gear ratios chosen for the four-speed Warner gearbox do not take full advantage of the excellent low-rpm torque of the turbo-charged V-8."

Motor Trend testers were considerably less charitable to the Jetfire, stating that "as a performance package it leaves much to be desired." With three-speed Hydra-Matic and the standard 3.36:1 axle ratio, their test car took 10.2 seconds to reach 60 mph. Running the quarter-mile took 18.7 seconds at a trap speed of 80 mph.

"Part of the lack of brilliance," Motor Trend explained, "must be blamed on the Hydra-Matic . . . one of the sloppiest-shifting boxes on the market." Yet, "the turbocharger has to share the blame, because its operation also seems less than perfect."

In theory, boost should remain constant from about 2400 rpm up to the peak of engine horsepower. The Jetfire's V-8, MT suggested, "feels as if the valve isn't allowing the impeller to pump enough mixture to keep a constant manifold pressure."

In acceleration tests at 4600 rpm, "performance takes a flop as the engine flattens out completely . . . like dead." And as the Hydra-Matic "slips its way into top gear the engine is stumbling badly . . . . [T]he engine runs out of breath in second and top gear at 4600 to 4700 rpm, which indicates that the blower isn't pumping pressure at this point. The feeling is the same as in a normally aspirated engine with too small a carburetor."

In the next section, learn how these and other issues contributed to the Jetfire's demise.