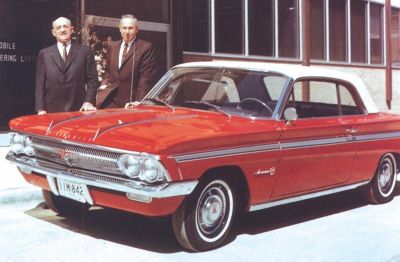 The Oldsmobile F-85 Jetfire generally looked like a Cutlass coupe, but it did have the distinction of being the only true hardtop in the F-85 line; all other closed two-doors had fixed door frames and B-pillars.

Beyond that, the Jetfire featured exclusive brushed-aluminum bodyside panels and special "Jetfire" badging on the trunklid and front fenders. Two chrome hood spears were used, rather than one as seen on the Cutlass.

Aside from a dash badge and standard floor console with built-in turbo-function gauge, the Jetfire's interior was a close match to the Cutlass cabin, the principal features of which were foam-cushioned bucket seats and a deluxe two-spoke steering wheel.

The instrument panel was F-85 pure and simple, dominated by a horizontal 120-mph speedometer in a pod dead ahead of the driver. A column-shift three-speed manual transmission was standard, but floor levers operated the extra-cost four-speed stick and Hydra-Matic transmissions.

Enthusiasts soon found fault with the instruments, specifically the lack of a true, calibrated boost gauge. The vacuum-boost gauge on the center console instead had simple red and green segments marked "power" and "economy." (The warning light that signaled low injection-fluid levels was included in this dial, too.) To make matters worse, the gauge's position made it hard to see.

Next, discover what critics had to say about the Oldsmobile F-85 Jetfire's performance.