The 1962-1963 Mercury S-55s were great accomplishments for Mercury as it ventured into the sporty car category.

Right from its birth in 1939, Ford Motor Company's "in-between" car established a performance reputation to match its name. Mercury maintained that image into the early 1950s with speedy, good-handling cars that competed well in events like the famed Mexican Road Race -- but also the Mobilgas Economy Runs.

The make then lost its way for a few years, blowing up into costly, begadgeted "Big M" cruisers that moved well enough on straights but didn't like curves at all. Aggravated by 1958's flash recession, Mercury finished the decade with model-year production below 150,000, less than half its 300,000-unit record of 1955.

But Mercury would revert to saner cars in the 1960s while reasserting its performance image. First came a sensible compact, the Comet, based on Ford's new-for-1960 Falcon, followed by trimmer, simpler, and cheaper 1961 "standards" based on the contemporary full-size Ford.

Production returned to the 300,000 level, helped by an improving market that was showing strong interest in sporty cars like Chevrolet's bucket-seat Corvair Monza and Impala SS.

Having tested the sporty-car waters with the 1961 Comet S-22, Mercury jumped in with both feet for 1962. The S-22 returned along with a similar S-33 edition of the new mid-size Meteor, a clone of Ford's Fairlane. But the pride of the sports department was a pair of big bucket-seat Mercurys called S-55.

More properly, we should call it the Monterey Custom S-55, as the new convertible and hardtop coupe were officially sub-models in Mercury's upper-level 1962 big-car line. They were also "half-year" models, arriving simultaneously with the Ford Galaxie 500XLs they essentially duplicated.

Though still on Ford's 1960 full-size platform, the 1962 Monterey, Monterey Custom, and Station Wagon lines wore a slightly busier version of Mercury's 1961 big-car styling. Overall, they probably came off better then than they do now, but "forgettable" is about the worst you could say of them.

Learn more about the 1962 Mercury S-55 and its contemporaries and see what changes were made to the 1963 Mercury S-55 on the next page.

The reverse-slant Breezeway roofline of the S-55 coupe was brought to the four-door hardtop in 1963.
©2007 Publications International, Ltd.

The "ordinary" four-barrel version of the Marauder, offered mainly to qualify for stock-car racing, pumped out 385 horses and a tremendous 444 pounds/feet of torque. For drag strip duty, there was a triple two-barrel 406 rated at 405 bhp -- almost the magic "1 h.p. per cu. in." and the most power Mercury had ever offered.

Sporty fast-road work, not winning track performance, was the Mercury S-55's main mission. As a result, most of the 1962 Mercury S-55s left the factory with one of the 390s and standard three-speed Multi-Drive automatic (Cruise-O-Matic at Ford), though four-speed manual was a no-cost, if seldom ordered, option. Besides, the 406s were expensive ($321 for the "NASCAR" mill, $406 for the "drag" engine).

Then again, the Mercury S-55 was hardly budget-priced itself, as it carried a sticker nearly $520 over comparable Customs. But at least it offered a fair amount of equipment to offset its cost: slim-back front bucket seats, a shiny center shift console with glove box, all-vinyl trim, special tri-color wheel covers and "S-Fifty-Five" exterior i.d., heavy-duty suspension and brakes, and meatier 7.10 x 15 tires.

Nevertheless, the S-55 returned for 1963. Though the basic package was unchanged, the 406 options were joined by a pair of new 427s: four-barrel 410-bhp and twin-four-barrel 425-bhp. Mercury's 1963 styling was all new and quite distinctive, especially the reverse-slant "Breezeway" roof with drop-down rear window on the S-55 hardtop coupe.

But there was also a four-door hardtop S-55 in addition to the convertible, and at midseason there appeared a handsome "slantback" hardtop coupe called Marauder, offered in both Custom and S-55 form. The added models meant a slightly broader price range, and this plus a full sales year boosted S-55 production to 8,764 -- better, but still far behind other big sporty models.

With such modest popularity, It's hardly surprising that the S-55 disappeared from Mercury's 25th Anniversary big-car line. However, its essential features survived in a "Sports Package" option for the top-line 1964 Park Lane convertible and Marauder two- and four-door hardtops. But the S-55 would eventually return. 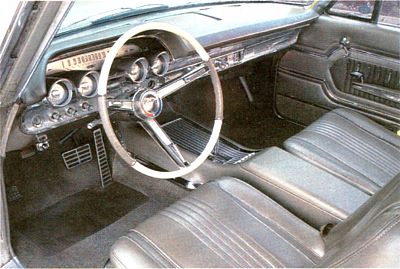 The main features of the 1962-1963 Mercury S-55 would later be reused as a "Sports Package" option on other Mercury vehicles.