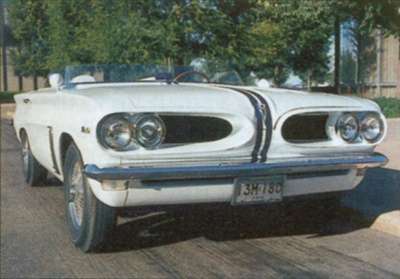 In 1961 Pontiac attempted to turn the Tempest into an eye-catching show car. Ever since the 1954 Bonneville Special fascinated showgoers at the General Motors Motorama, Pontiac longed for a production two-seat sports car to call its own. However, pressure by Chevrolet to protect its Corvette from interdivisional competition prevented that from becoming a reality.

Until the Fiero was introduced in 1984, Pontiac would be forced to satisfy its sports-car cravings by building one-off show cars. The 1961-62 Tempest Monte Carlo was an especially intriguing prototype because it was a production-based car, which, by its very nature, implied that it was indeed producible.

Starting with a prototype for the 1962 Tempest convertible (there were no '61 ragtops), engineers sliced a 15-inch section out of the unit body between the door and the rear wheels, then welded the remaining halves together. The result was a 97-inch wheelbase two-seater with an overall length of 175 inches. Custom eggcrate grilles were recessed in the stock openings and the stock windshield was removed and replaced by a Plexiglass windscreen that wrapped around to the doors. A fiberglass tonneau with twin headrest fairings replaced the stock rear deck.

The interior was functional and attractive. Twin production-style bucket seats with custom side bolsters and retracting seatbelts were finished in blue leather. A custom console housed the shifter and a manifold vacuum gauge, while a set of competition gauges were set in the stock dash opening.

The Monte Carlo's engine was a highly modified version of the 195-cid Pontiac four. It featured a Mickey Thompson supercharger system, which used a GMC 3-71 blower and was fed by a Carter AFB four-barrel carburetor adapted to the blower with a special 90-degree elbow. In the classic show-car tradition, the engine was dressed up with chrome and polished aluminum components. It was hooked to a rear-mounted four-speed trans-axle by way of the Tempest's unique curved driveshaft.

The Tempest Monte Carlo was finished in pearlescent white with twin blue racing stripes running over the hood and deck. For the 1961 show season, the roadster rode on a set of Halibrand knock-off racing wheels shod with Firestone Super Sport tires. When Pontiac showed the two-seater again in 1962, the wheels were replaced by a set of knock-off wires bearing Goodyear Blue Streak tires.

As part of its show duties, the Tempest Monte Carlo was displayed at select racetracks with Chevy's Corvair Sebring Spyder show car. After the Monte Carlo's tour schedule was completed, Pontiac had no further use for it. Rather than crushing it, as was the normal fate for most non-production cars, it was presented to former GM vice president Ed Cole. Before he took delivery however, it was sent back to Pontiac Engineering, where at his request the supercharged four-cylinder was replaced with a much tamer 215-cid aluminum V-8.

The windscreen was also replaced with a production windshield and a small convertible top was also added. The Monte Carlo was used in this configuration by the Cole family until Ed Cole's tragic death in a 1977 airplane crash. His widow donated the roadster to the San Antonio (Texas) Museum of Transportation, where it spent several years in storage.

When the Texas Science Center Automotive Collection was closed in 1994, its inventory was liquidated by auctioneer Christie's. At its prestigious Pebble Beach sale, the Monte Carlo fetched nearly $60,000. According to Christie's, the current owner wishes to remain anonymous.

We have one more permutation of the Pontiac Tempest to show you. On the next page, you will learn about the Lightweight Super Duties.