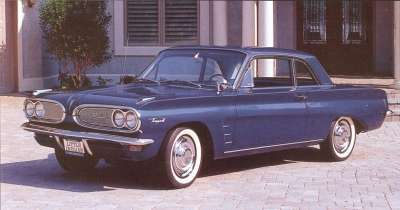 The 1961 Pontiac Tempest Custom was quickly identified by its wrapped read roor quarters that gave it the look of a convertible.
©2007 Publications International, Ltd.

The 1961 Pontiac Tempest was both an engineering and a styling achievement. The Tempest, with its distinctive split grill and prominent Pontiac hood crest, was penned by Jack Humbert. The front-end treatment, which recalled the 1959 Pontiac, featured quad headlamps and a bright horizontal-bar grille treatment.

Like its Y-body cousins, the Tempest featured a fell-length bodyside wind-split at the beltline and a deeply contoured accent line that began in the front fenders, extended through the doors, and ended in the rear quarters. (The doors were the same in all three cars.) In the Tempest, the accent line was sculpted to form a body cove that encompassed the rear wheel wells. The beltline windsplit formed a small fin at the top of the rear quarter, ending just above the small oval taillamps. Simple blade bumpers were used front and rear.

Overall dimensions of the Tempest put it at the upper end of the small-car category, making it one of the so-called "senior compacts." In addition to the aforementioned 112-inch wheelbase, it boasted an overall length of 189.3 inches, a width of 72.2 inches, and overall height of 56.8 inches (57.1 for wagons). Front and rear tread width was 56.8 inches.

Inside, the Tempest was pleasant looking and remarkably roomy, with large expanses of glass for a light, airy environment and 360-degree visibility. The basic dash panel was shared with the related Buick and Olds, though details were unique to each car. The Tempest used a strip speedometer housed in an upright horizontal housing. The dash had the usual array of "idiot lights" and automatic-transmission cars had the gear selector mounted on the dash, to the right of the driver.

Cars with manual transmissions received a floor shifter. Bench seats were used front and rear, allowing six-passenger seating. Leg room was very generous, owing to the nearly flat floor, though there was still a bit of a hump in front to clear the bellhousing.

Comfort and convenience options ran the gamut from power steering to air conditioning, back-up lights, and a variety of interior and exterior decor groups. Power brakes were not offered, even as optional equipment.

The Tempest was initially available in four-door sedan and four-door station wagon bodystyles. Later in the model year, a Tempest coupe was introduced, as was a sporty, upscale version with bucket seats that was named LeMans.

Once the Pontiac Tempest hit the showrooms, it was an instant hit. On the next page, learn about the success of the Tempest.