Although luxury cars with more than eight cylinders came and went mostly during the Depression era, some 1960s Cadillac concept cars at least entertained the notion of resurrecting their glamor. And why not? After all, Cadillac's experience with such cars dated from distant 1930, when its V-16 bowed at least a year ahead of every other domestic multi-cylinder engine.

The cars Cadillac powered have long ranked among the greatest of the Classics, and the V-16 itself was arguably the most important engine to emerge from that era save the hallowed Duesenberg J straight-eight.

What's more, only Cadillac really profited with multi-cylinder power. Before demand tailed off in mid-1930, General Motors' prestige division shipped over 2,000 Sixteens, more than all the 16-cylinder Marmons built in three years.

Lincoln and Packard didn't have anything comparable until 1932, and then "only" V-12s. By that point, Cadillac had a V-12 of its own, and the make's combined multi-cylinder sales were always the industry's highest by far, if modest by absolute standards.

But multi-cylinder giants were an arrogant indulgence for "hard times," and most were gone well before World War II. The main reasons were high production costs and selling prices versus very low demand, which forced Packard and even Cadillac to abandon such cars entirely after 1940. Though Lincoln's small "cheap" V-12 persisted through 1948, it was obsolete long before.

An added blow to multi-cylinder American cars in the postwar period was the advent of high-octane gasoline, which allowed smaller engines to produce comparable power via overhead valves and higher compression, thus eliminating the need for more than eight cylinders. With that, the ohv V-8 became Detroit's engine of choice. By 1955, every U.S. make offered at least one.

This V-12 hardtop coupe concept car was proposed in May 1963. Its rear fender lines would show up in modified form on the 1967 Cadillac Eldorado.
©2007 Publications International, Ltd.

Nevertheless, the expanding prosperity and sky's-the-limit optimism of the Eisenhower years soon renewed thoughts of 12- and 16-cylinder engines, only with modern, high-compression ohv heads.

Go to the next page to learn more about the race for putting a multi-cylinder car on the market during the 1960s.

This circa-1963 concept for an open V-16 Cadillac was reminiscent of classic 1930s speedsters.
©2007 Publications International, Ltd.

Leading the way in the 1960s multi-cylinder race was Packard, which in 1955 was desperately seeking to recover some of its squandered past glory. The idea was a V-12 derived from its just-announced V-8.

According to former product planner Richard Stout, this would have been machined on the V-8 line, the longer block being moved "halfway down" to bore the extra cylinders.

Since the V-8 block was a 90-degree "Y," 30 degrees out of phase for the "in-step" firing desirable in a V-12, each rod throw would be staggered 30 degrees to compensate. Buick would use this same "split-throw" principle for its 90-degree V-6 in the early 1960s.

With 480 cubic inches and all the horsepower that implied, Packard's postwar V-12 would have been a mighty work indeed. But as Dick Stout remembered: "It was strictly grandstand stuff. . . . Tooling was guesstimated in the $750,000 area -- modest for such a spectacular result. . . . But in the end the money just wasn't there."

In fact, Studebaker-Packard then faced imminent bankruptcy and so abandoned luxury Packards after 1956, substituting medium-priced Studebaker-based cars through the marque's sad demise in 1958.

This multi-cylinder concept car from designer Wayne Cady was done in March 1965. It was badged LaSalle, the name of the 1930s Baby Cadillac.
©2007 Publications International, Ltd.

The contemplated V-16 probably had nothing to do with Cadillac's own V-8. By 1960, the division's milestone 331 V-8 of 1949 had swelled to nearly 400 cid, which would have made a twin-block sixteen simply gargantuan.

A more likely choice was Chevrolet's 283, which would have doubled-up to 566 cid -- big, but not impossible. According to former GM Design Director Chuck Jordan, who then headed Cadillac Styling and worked on that side of the V-16 revival, this engine was more conjecture than concrete proposal.

"We were working with Engineering Staff to put two V-8s together," he later recalled. "It was kind of a homemade way to do it, but it was just to project an image we wanted to get across to [division management] at the time. Nothing serious was ever developed engineering-wise."

More intriguing was the clean-slate V-12 being prepared at the same time. Jordan remembered this as "a very sophisticated powerplant, and quite beautiful. I'm sure it was designed from scratch as an overhead-cam engine -- a very exciting piece of machinery to see."

This radical 1960s Cadillac concept car was an August 1963 effort from Wayne Cady. The nose of this scale model carries hints of the 1966 Buick Riviera.
©2007 Publications International, Ltd.

Also a 90-degree unit, it was designed for instep firing à la Packard's stillborn V-12. Aside from that and sohc heads, technical details remain obscure.

It's unclear whether the clean-slate V-12 or the crude V-16 were ever seriously considered for production, but there's no doubt that development stopped at the prototype stage. Still, Chuck Jordan and his colleagues came up with a remarkable group of design studies for a new multi-cylinder Cadillac.

To learn more about these multi-cylinder ideas, check out the next section.

One of the first scale models of 1960s Cadillac concept cars was a close-coupled coupe with approved 1963 lower-body styling but a much longer front -- truly enormous, in fact -- plus a dramatically tapered fastback roof of the sort favored by corporate design chief William L. Mitchell. Gradually, work proceeded through scale- and full-size clay models designed from the ground up.

Jordan emphasized that it was all mostly for fun: "It was a two-passenger Cad with 16 cylinders all right, but it was done just to make a statement about the heritage of Cadillac and where we were going with the image. . . .

"We built several scale models and one full-size clay. The concept of all was invariably the same: a long-hooded car to contain the long engine. These designs were exaggerated, almost cartoon-like, but exciting to work on. This was one of our pet advanced projects at the time."

Still, somebody must have taken this work seriously, for by December 1965 the new multi-cylinder Cadillac had won "official" status as one of GM's famous "Xperimental Projects": XP-840. This progressed to a full-size mockup for a two-seat V-16 fastback coupe.

Typically shown in the GM Design viewing court, it continued the "substantial" look of earlier proposals, most notably in profile, plus a domed "prow" hood and matching vee'd windshield.

The fastback coupe had no back window or inside rearview mirror. Instead, in a prediction of a real future feature, a video camera supplied the view aft.
©2007 Publications International, Ltd.

But there were many startling firsts here -- like no back window or inside rearview mirror; instead, a narrow slit was cut into the roof as a viewport for a rear-facing TV camera

As photos testify, designers really cut loose on this two-passenger fastback, giving it a massive undercut nose, semi-separate front fenders, a huge wrapped windshield sans A-pillars, double-notched beltline, a back panel deeply inset between bold "outrigger" rear fenderlines, and the ribbed "cuffs" spilling out and down from the hood to recall the outside exhaust pipes of Classic days.

The nameplates on the
©2007 Publications International, Ltd.

Nameplates read "Eldorado," but probably just for convenience. Cadillac had no need for a new V-12 or V-16, and all the design work toward such a car was done mainly in speculative fun.

Go to our final section to read about more of 1960s Cadillac concept cars. 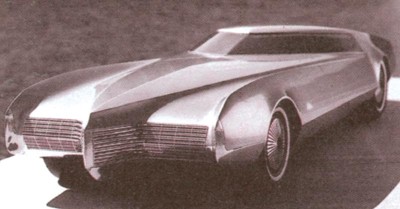 Another view of the 1963 Cadillac concept car shows sharp fender lines and bulging wheel arches similar to those on the 1966 Oldsmobile Toronado.
©2007 Publications International, Ltd.

Renderings often toyed with open or semi-open concepts. Wayne Cady, for example, sketched a concept car that was rather reminiscent of Classic 1930s speedsters. The circa 1963 concept car featured an open V-16, wore "Cyclone" badges, and had a plethora of hood air intakes. The rakish perimeter windscreen harmonized with the Buick-style bodyside "sweepspear" lines, but it would have been far too costly for series production.

A May 1963 proposal shows a crisp yet bulky-looking V-12 hardtop with close-coupled notchback roofline and wild two-tier front. Aft fenderlines would show up in modified form on Cadillac's new front-drive 1967 Eldorado.

Another drawing shows a super-low roadster with the character of a speedboat: low windscreen wrapped all the way to the rear fenders, vee'd deck, and 16 "ventiports" in the vastly longer front to accommodate the engine.

The ventiports, presumably, were air intakes for separate carbs in these years before government emissions standards and Detroit's wholesale move to fuel injection. This sketch also showed a sweeping fastback roof -- a feature that likely would have been too much for Cadillac's conservative audience.

Another scale model for the stillborn new-generation multi-cylinder Cadillac appeared in August 1963. A prominently peaked hood and grille were highlights, along with a "cantilevered" roof sans A-posts, a radically vee'd windshield, a vee'd rear deck to complement both the windshield curvature and the pointy snout, and muscular, wide-stance proportions.

The concept car's profile displayed hints of the 1966 Buick Riviera front, while the front view displayed sharp fenderlines and bulging wheel arches like those adopted for Oldsmobile's new 1966 Toronado. A fastback roof treatment with no beltline "break" at the rear wheels would also be seen on both those production models, though in quieter form.

Another Cadillac concept was a more formal multi-cylinder from March 1965; its C-post script intriguingly read "LaSalle." The semi-open fastback would have been a 1960s novelty.

The unchallenged luxury sales leader, Cadillac really had no need in the 1960s for a V-12 or V-16 model, so wild concept cars such as this were mostly flights of fancy.
©2007 Publications International, Ltd.

In the end, though, there was no hope. As Jordan recalled: "We finally dropped the project after the full-size model was completed. We had a lot of other things to do, and here we were playing with a full-size clay we never intended to expose. It was strictly a styling exercise."

Of course, it's styling exercises like this that fire the dreams of enthusiasts, and in retrospect it's a shame the division went no further with a postwar multi-cylinder car.