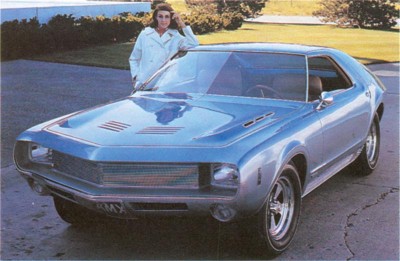 The sometimes pretty, sometimes puzzling 1960s AMC concept cars are proof that when the going gets tough, automakers get going on show cars.

After all, what better than a dazzling concept car to dispel any public notions of corporate trouble -- and to spark hopes that what's sitting on the spot-lit turntable (or something much like it) might soon be sitting in your garage? This was the job of the 1960s AMC concept cars.

American Motors Corporation had plenty of tough going in its 33 years of existence, but for 25 of those years it had the perfect person to head up its styling efforts in Richard A. Teague. A California native and one-time child actor, Teague began his design career in 1948 with General Motors, who hired him after his graduation from the prestigious Art Center College of Design in Pasadena.

But Teague didn't make his mark until after joining Packard in 1951, where he learned to do more work with fewer resources than most any other designer around.

Besides the adept facelift for the "last real Packards" of 1955-56, Teague accomplished the memorable Request and Predictor show cars despite the shoestring budgets then typical of what he later called Packard's "last days in the bunker." The Predictor, of course, was supposed to herald an all-new '57 Packard line that didn't materialize because Studebaker-Packard Corporation was nearly broke.

After brief stints with Chrysler and an independent design firm headed by Ford alumnus Bill Schmidt, Teague went to American Motors in 1959, where he assisted Ed Anderson in what passed for a styling department. When Anderson left in 1964, Teague was named vice-president of design, largely on the strength of his pretty and popular styling for that year's rebodied Rambler American compact. In short order he turned AMC's design section into a far larger and more professional operation.

Meantime, the 1960s were all a-go-go, and AMC was working hard to reverse its stodgy image as a builder of nothing but sensible economy cars. Yet despite the expansionist visions of president Roy Abernethy, to say nothing of Teague's own best efforts, AMC was in financial hot water by 1966.

That attracted the interest of one Robert B. Evans, a Detroit industrialist who specialized in corporate rescues and was not, by his own admission, an "automobile man." Still, Evans judged AMC a good investment in spite of its problems, and bought large blocks of company stock. With that, he soon had himself a seat on the board of directors. John Conde, AMC's longtime public relations chief, later described him as "a breath of fresh air at the time."

Go to the next page to learn about the new team's next step, the hot AMC AMX concept cars.

The AMC AMX concept cars were early looks at what would become one of AMC's signature model lines: the sporty 1968 AMC Javelin pony car coupe and its two-seat companion, the 1968 AMC AMX muscle car.

Newly installed AMC chief Robert B. Evans had breezed in believing that the key to AMC's future was "to do things differently -- find new ways to do new things and try new ideas." Accordingly, he put Teague to work on what ultimately became a quartet of show cars with plenty of new ideas that promised to jazz up AMC's image in a big way. To ensure plenty of exposure, Evans sent the cars on a nationwide tour as "Project IV," billed as a traveling "auto show of the future."

While none of the Project IV cars saw production per se, one provided a preview of a near-term AMC model. That, of course, was the unique two/four-seat AMX, the direct forerunner of the Javelin-based two-seat fastback that appeared during 1968.

The show model had originated in AMC's advanced styling section under Chuck Mashigan in October 1965. Unveiled four months later as a non-running mockup built from a trashed American, it attracted such favorable notice that AMC hired the famed Vignale works in Italy to build a fully operational version for Project IV. It was finished in just 78 days.

The 1965 AMC AMX concept car was dubbed the "pushmobile." It lacked an engine and needed to be pushed around.
©2007 Publications International, Ltd.

Though differing somewhat in details, both the "pushmobile" and the Vignale AMXs had the same tight shape -- what Teague called a "wet T-shirt look" -- plus the whimsically named "Ramble Seat." The latter referred to a pair of jump seats that folded up from the rear cabin floor to provide al fresco accommodation for two occasional riders, whose comfort was enhanced by a back window that swiveled up to double as an auxiliary windshield.

The Vignale AMX also had a pair of small rear seats inside, for use when the Ramble Seat wasn't. Both show models rode a 98-inch wheelbase like the eventual showroom AMX, and the "runner" carried the same new 290-cubic-inch AMC V-8 that would be standard on production AMXs.

The AMC Vignale concept car was a running version of the AMC AMX concept. It included open-air accommodations for two, or the "Ramble Seat."
©2007 Publications International, Ltd.

Alas, the Ramble Seat was deemed too costly and impractical for the street. So was another show-car feature: a striking "cantilevered" front roofline with no visible A-pillars; instead, door glass extended right around to the windshield for an ultra-clean appearance. Somehow, Teague managed to conceal a functional roll bar within. Incidentally, beige leather covered all seats in the runner, which also featured a center console with electric push-button controls for the Ramble Seat.

While the AMX and Vignale concept cars did hint at AMC production models on the horizon, not all AMC concept cars would follow suit. Go to the next page to learn about two that didn't.

The AMX II and AMC Cavalier concept cars were slight deviations from a formula that had AMC concept cars predicting production models of the near future.

As we know, the production AMX was a clever section job on AMC's new-for-1968 Javelin ponycar. Even so, it owed much to its one-off forebears in style and character. In fact, when the time came to name it, Teague insisted on keeping AMX even though the initials had originally meant "American Motors Experimental."

His logical argument: People already recognized the basic concept by that name, so why change it? But though exciting in itself and downright startling for AMC, the production AMX wasn't all that popular: Just 19,134 were built over three model years.

The other members of Project IV were noticeably less radical than the concept AMXs, yet no less interesting. The least predictive of this forward-looking trio was the AMX II, a smooth notchback hardtop coupe that looked nothing like the Ramble Seat cars-doubtless because it was created under Vince Gardner, an outside consultant.

Features included hidden headlamps within a big bumper/grille, pointy front fenders, clean flanks, a rear window vee'd in plan view to match deck contour, and "safety taillights" that glowed green, amber, or red to signal going, coasting, or stopping. At 187 inches overall, AMX II was eight inches longer than "AMX I." Most of the extra inches showed up in wheelbase to provide full four-passenger seating.

It's a shame that something like the attractive AMX II didn't wind up as one of AMC's post-1969 Hornet compacts, though Teague did manage a nice Hornet hatchback coupe for 1973. He certainly might have remembered it when shaping the swollen 1974 Matador coupe, arguably his least distinguished effort after the pudgy-looking late-1970s Pacer.

On the other hand, Teague did himself proud with the only sedan in Project IV. Called Cavalier, it looked good for a compact four-door, measuring 175 inches long, with gently curved sides, jaunty "flying buttress" rear-roof quarters, full wheelarches, and minimal "gingerbread." In general form the Cavalier predicted the future Hornet save a shorter hood giving equal-length front and rear decks.

Those proportions were not accidental, for the Cavalier was basically an exercise in interchangeable body panels, an idea that had also lately occupied Brooks Stevens with his "Familia" proposal as a last-gasp salvation for Studebaker.

Though less extreme than Stevens's design, Cavalier promised similar savings in production costs. Its hood and trunklid, for example, were completely identical, as were bumpers at each end. Fenders could be swapped left-front to right-rear and right-front to left-rear. Doors apparently did not interchange, though they looked otherwise. Perhaps just for fun, Teague hinged the rear ones from the back, "suicide-style."

AMC's following round of concept cars would include two losers and one winner. Go to the next page to find out which was which.

The 1965 AMC Vixen concept car was a coupe companion to the Cavalier concept sedan, though it didn't use interchangeable body panels.
©2007 Publications International, Ltd.

Looking back at the last of the 1960s AMC concept cars, it's clear one didn't deserve to be put into production, one should have been, and one might have been a success. Take those conclusions in order, and apply them to the AMC Vixen, AMX-GT, and AMX III concept cars

Rounding out Project IV was the Vixen, essentially a coupe companion to Cavalier designed with no thought of panel swapping. It, too, forecast Hornet appearance in its simple blunt "face," dual headlamps, long-hood/short-deck profile, and flared wheel openings.

Lower bodysides were a Hornet/Javelin mix, but the distinctive rear roofline was Vixen's own. Small sliding quarter windows enhanced interior ventilation; behind were vertical vanes angled at 45 degrees to give a measure of privacy without obstructing vision. The louvers also conferred a certain design "distinction" that prefigured an unhappy fad of the late Seventies.

Like most auto-show exercises, Project IV was more trial balloon than research tool. Though Abernethy declared that public response "to the innovations presented will have substantial bearing on [our] decisions," many Project IV styling ideas had already been approved for Javelin, AMX, the more distant Hornet, and other future models. Still, evidence suggests that Project IV accomplished its goal of convincing the public that AMC had a future after all, and a bright, exciting one at that.

As a result, AMC experimentals soon became regular showtime fare. For example, 1967 saw an AMX III that previewed Javelin front-end styling as well as the general shape of the Hornet Sportabout wagon then four years away. And though we didn't know it at the time, 1968's AMX-GT was, for all intents and purposes, a preview (warning?) of the 1970 Hornet-based Gremlin.

Though not part of Project IV, the bold AMX-GT suggested that the later Gremlin would have looked great with a Javelin instead of Hornet front end. Built on a 97-inch wheelbase, the AMX-GT bowed at the New York Auto Show in April 1968 wearing simple flush wheel covers and red paint with a white bodyside/roof stripe. It was later given five-spoke road wheels and black hood/roof paint. Rear side glass was fixed, but B-pillars were absent.

The 1968 AMC AMX III sportwagon concept car was basically a 1968 AMC Javelin coupe turned into a four-door. It didn't make it to showrooms.
©2007 Publications International, Ltd.

A final AMC concept car from this period was the 1967 AMX III "sportwagon." This was was also a virtually stock 1968 Javelin in front, but included a stretched four-door body with a fastback wagon tail. A November 1967 mockup suggested that AMC considered adding a four-door Javelin at some point. A pity the notion went no further.