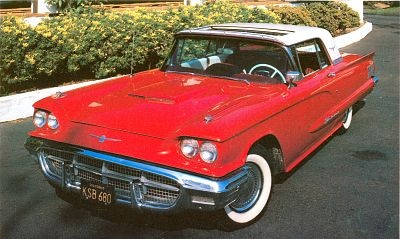 Lay aside everything you've heard in condemnation of the four-seat 1960 Ford Thunderbird -- all that stuff about forsaking the sports car, substituting glitz for function, adding the hated back seat.

It is all immaterial because it misses the point: Despite its deviation from the original concept, the first four-seat Thunderbird was simply a masterpiece of design.

In fact, it may well be one of the outstanding American automotive achievements of the decade. Furthermore, it earned this honor without relying upon the technological dead-ends of the era: air suspension, fuel injection, supercharging, and retractable hardtops. Though all of these were considered, all were rejected.

Chief Thunderbird body engineer Bob Hennessy claims the "Squarebird" was revolutionary. "Take that car and stick it in front of your house today. It doesn't look at all out of date. When we were working on it, the standard automobile sat maybe 61 inches off the ground -- shoulder height.

The Squarebird sat 52.5 inches off the ground. To get a low sports-car look, we took 10 inches out of the then-standard car height." The four-seat 'Bird was a huge commercial hit, too, far more successful than the two-seater ever was.

For model year 1960, Ford Styling had proposed a number of revisions to the now-two-year-old Squarebird design. The Thunderbird roofline had been applied to large Fords in 1959, and stylists were concerned that it was losing its originality.

But sheet metal changes were not feasible from either a cost or merchandising standpoint, according to Ford Division committee minutes, "Similarly, partial revision to existing surface, i.e., roof, front end, bumpers, etc., did not provide enough visual difference to warrant the required expenditure of funds." The Bird was in its last year of a styling cycle, and it was felt wiser to withhold serious changes until 1961.

The 1960 Thunderbirds were down very slightly in weight but up in price. The base figures were $3,755 for the hardtop and $4,222 for the convertible. No mechanical changes occurred, and there were only a few styling differences -- vertical hash-marks added to rear fenders, "Thunderbird" script on the door projectile, a square-mesh grille with full-width horizontal bars and six taillights instead of four.

There were also minor changes to emblems and ornaments, and a standard rectangular outside mirror. Door handles were blended more closely with the upper belt molding and the door trim was changed to incorporate a built-in armrest.

On early models, built through the end of December 1959, there was a smooth belt molding; this was corrugated on cars built in 1960. The '60 model also used a number of stainless-steel components, and two were actually built entirely of stainless steel by one of Ford's suppliers, Allegheny-Ludlum Steel Corporation.

Find out more about the 1960 Ford Thunderbird's sliding metal sunroof on the next page. 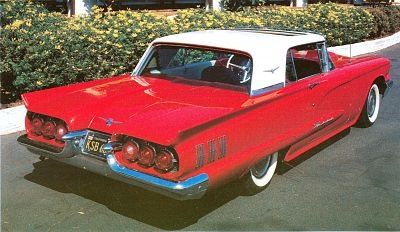 The first postwar sliding steel sunroof was offered on the 1960 T-Bird, which had otherwise been carried over from 1959 with few changes.
©2007 Publications International, Ltd.

For 1960, Ford introduced the first sliding metal sunroof on the 1960 Ford Thunderbird. It looked good, and it worked well.

However, the sunroof was not by any means the first choice of product planners, many of whom wanted a retractable hardtop, like the big Ford Skyliner.

But the engineering would have been tremendously complicated owing to the Squarebird's short deck, and even the conventional soft top proved a complicated affair, taking up most of the room under the decklid when lowered.

Planners also considered a "roof incorporating flippers," probably indented sections that telescoped back or lifted when the door was opened. This idea was also rejected for reasons of cost and complexity.

Ford's attention to detail was evident in the presence of a roof-mounted chrome railing, which directed wind and noise away from the passenger compartment when the hatch was open. Sunroofs were fitted to 2159 standard hardtops plus 377 with the optional 430-cid engine -- fewer than three percent of production.

What were the faults of the Squarebird? Roadability, certainly. It was far from "the kind of handling car it should be," Motor Trend wrote in 1960. "Steering is slow and not precise...it has no reputation for...the dimensional attributes of a compact and yet lacks some of those same characteristics of maneuverability." A curious assessment from the magazine which two years earlier called it the "Car of the Year."

But the Squarebird was notable for several things, and Motor Trend knew it: "What it does have is originality, freshness, and newness of concept...It has, more than any current domestic car, the spirit and quality that made the classic roadsters and tourers of the 1930s such memorable favorites."

Continue reading to find out about the 1960 Ford Thunderbird specifications. 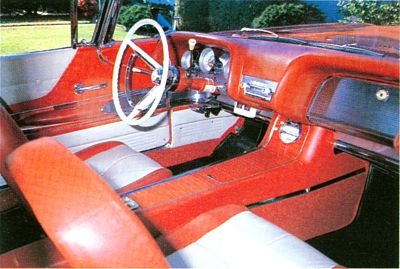 Like the Thunderbird in general, interiors were leaning more toward luxury than sport by this time.
©2007 Publications International, Ltd.

The 1960 Ford Thunderbird represented a leap forward in automotive design and as a result will long forever remain the in the hearts of American auto lovers.