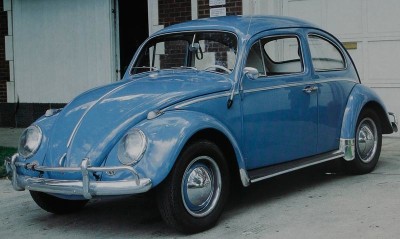 The 1963 Volkswagen Beetle no longer featured the distinctive Wolfsburg crest on the trunklid. Beetle sales in the U.S. topped 200,000 for the first time.
2007 Publications International, Ltd

The 1962-1966 Volkswagen Beetle enjoyed a winning combination of clever advertising and several years of what seemed like -- could it be? -- Detroit-style annual model changes.

But at a time when Detroit was promoting "longer, lower, and wider," Volkswagen promoted the 1962 Volkswagen Beetle by asking buyers to "Think small."

The Wolfsburg crest that had graced Beetle trunklids since 1951 disappeared for the 1963 Volkswagen Beetle, but that was about the only visual cue to denote the new model. However, a leatherette headliner appeared, sunroof models got a folding crank handle, foam insulation was added to the floor, and a new fresh-air heating system was added.

Volkswagen celebrated a milestone in 1964, as Beetle number 10 million was built. The 1964 Volkswagen Beetle offered sun worshippers a steel sunroof, replacing the former fabric version. The new one didn't extend nearly as far back, however, so it didn't leave the gaping hole for rays to shine through that the old one did. For those who needed more, there was always the convertible with its snug-fitting insulated top.

For 1965, Volkswagen retooled and took the opportunity to improve visibility once more via larger windows (but only on European- and American-market cars). Also new that year was a folding rear seatback for extra inside luggage space, and a further improved heater controlled by two levers flanking the central handbrake.

The Wolfsburg plant on the Mittelland Canal was by now Germany's largest and most modern automotive assembly facility. Some of the 1.3 million Beetles sold in the U.S. by 1965 were turned into rolling frat houses. How many people could be packed into -- or on -- a Volkswagen became a source of bragging rights on college campuses throughout the country during the 1960s.

Yellow turn-signal lenses appeared for the 1966 Volkswagen Beetle, as did emergency flashers, and the high-beam switch moved from the floor to the turn-signal lever. The engine enlarged to 1285-cc and 50 horsepower.

Slotted wheels provided a bit of cooling air to the brakes, and carried new hubcaps with a flatter design. The steel sunroof that was introduced for 1964 showed up on 20 percent of 1966 Volkswagen Beetles in 1966.