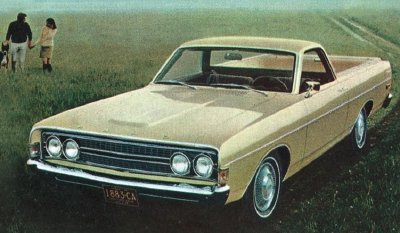 1968 brought a redesigned Ranchero, again built off Ford's midsize car platform, to the Ford truck line. Also, Ford's medium-duty trucks were offered with a diesel engine for the first time, but there were few other changes to any of the other truck lines.

One of Ford Motor Company's top stories for 1968 had nothing to do with any of its products. Newly installed as president was Semon E. "Bunkie" Knudsen, who had jumped ship from General Motors to lead crosstown rival Ford. This was a reversal of what had happened back in the early 1920s when Knudsen's father had left Ford to take over an ailing Chevrolet.

Ford's midsize-car line was redesigned for 1968, and with it, the car-based Ranchero. The top engine was initially a 390-cubic-inch V-8, but added as a midyear option was Ford's mighty 428 Cobra Jet.

Aside from the addition of side marker lights, Bronco continued into 1968 with only minor changes in carryover Wagon, Pickup, and Roadster body styles.

Camping anyone? The enclosed 1968 Bronco Wagon was ready to go. In 1969, the Ford Econoline Series received its first redesign, and a sporty Ranchero GT came on the scene. Click to the next page to find out how Ford finished the decade.