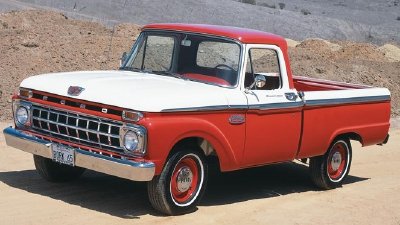 Ford's famous Twin-I-Beam front suspension made truck news for 1965. It was offered only on light-duty two-wheel-drive F-Series pickup trucks, giving them a softer ride and better handling characteristics.

Not only does it ride smoother with Twin-I-Beam front suspension, this restored Ford F-100 pickup truck looks quite flashy with its whitewall tires, chrome trim, and two-tone paint scheme.

In 1965, Ford Rancheros could also get "Deluxe" trim, in this case called the Futura Ornamentation Package.

Although equipped with a sleeper cab, this 1965 Ford C-750 truck didn't seem to offer much room to lie down. Both gas and diesel versions were offered.A new light-duty truck line -- the Bronco -- was big news for 1966. See Ford Bronco photos and get details on the next page.