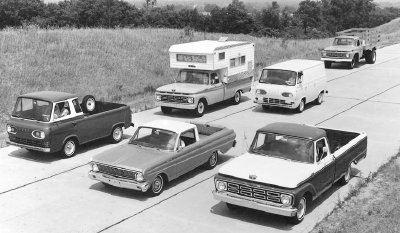 April 17, 1964, would go down in the annals of the Ford Motor Company as one of the company's best days, for it was on that day that Ford introduced the Mustang. Without question, it was the hit of the year, if not the decade.

On the truck side, 1964 brought a separate box for Styleside models, rendering the "unibody" pickup trucks a thing of the past. Also new was a brace of gas engines for the medium- and heavy-duty Ford truck lines.

Ford offered a wide selection of light-duty trucks in the 1960s, although they were matched one-for-one by rival Chevrolet. The biggest news for 1964 was the redesigned Ranchero (front row, center), which was again based on the likewise redesigned Ford Falcon compact car.

Grilles changed a bit on the popular Ford F-Series trucks in 1964, as shown on this F-250 4x4, which sports an eight-foot Flareside bed.

By 1964, an F-Series pickup could be fitted with such car-like features as two-tone paint and air conditioning.

Ford's 600-800 series trucks were powered by new V-8 engines for 1964. Essentially heavy-duty versions of their automotive counterparts, these engines displaced 330, 361, and 391 cubic inches, respectively, with 186 to 235 horsepower.