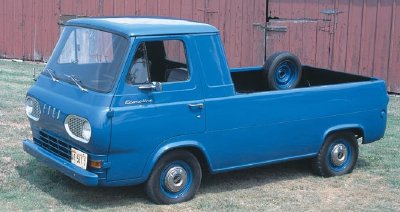 Ford's 1962 vacation from changes to their trucks didn't last long. In fact, Ford opened the 1963 model year with the release of another new series of trucks.

This line of medium- and heavy-duty models was referred to as the N-Series. Cabs were the same as those used for the F-Series, but the nose was significantly shorter. This arrangement placed the N-Series between Ford's conventional trucks and the C-Series Tilt Cabs, and made them popular for both city deliveries and over-the-road semi-tractor-trailer service where trailer-length limits were in force.

In other heavy-duty news, Ford expanded diesel engine offerings to include some F-, C-, and N-Series trucks; previously, only the H-Series had offered a diesel-engine option.

Ford's 1963 E-100 pickup trucks retained the Econoline moniker after the passenger wagon was renamed "Falcon" in 1961. Newly available on Econolines for 1963 was a one-ton payload package.

In addition to a new crosshatch grille for 1963, Ford Rancheros and Sedan Deliverys were blessed with an optional V-8 at midyear.

The 1963 rear-drive F-100s were offered with three different bed designs: a separate Styleside; a traditional Flareside; and a Styleside integrated with the cab, a version that would be dropped after 1963.

Ford's Super Duty line is represented here by a new-for-1963 N-Series short conventional truck. The H- and N-Series carried diesel engines, as indicated by a nose badge on the H and the nose lettering on this N.One Ford Econoline fan came up with an unique use for his E-100 in 1964. See a photo and learn more about 1964 Ford trucks in the next section.