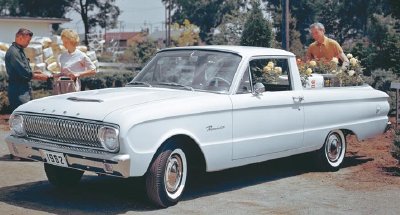 Because so much was new for Ford trucks in 1961, most trucks received only minor updates for 1962. However, for true Ford fans, these changes were noticeable. The Ford Ranchero received a bit of a cosmetic face lift, and after experimenting with fused cabs and Styleside beds, Ford's F-Series Styleside trucks began returning to separate cab and bed construction.

The Ford Ranchero greeted 1962 with a fresh face that included a new flush-mounted grille and pointed front fenders, but little else changed.

Ford had entered the diesel market in 1961 with Cummins-powered versions of the H-Series high tilt cab, designated the HD-Series. This 1962 HD-1000 came equipped with the largest of these engines, displacing 743 cubic inches and rated at 220 horsepower.

The Ford F-Series' grilles were slightly revised for 1962, replacing the FORD lettering in the middle with cross bars. Also for 1962, F-Series Styleside 4x4s came with a separate cab and bed, as shown here.

The cab and bed remained integrated on 1962 F-Series 4x2 models (as shown here), although these trucks also would offer the separate cab and bed by midyear.

Ford added a whole new series of trucks to their lineup in 1963. Learn more when you click to the next page.