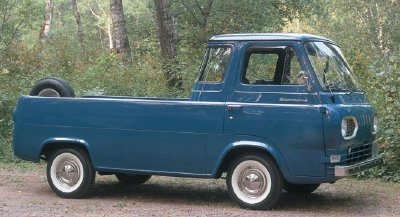 Ford's 1960 success with the Ranchero pickup truck was followed in 1961 by another Falcon derivative: the Econoline series. Also known as the E-Series, the line included a cargo van, a passenger van, and a pickup truck. The van was almost literally a box on wheels, with the pickup being a box with the top rear quarter removed.

Added to the opposite end of the Ford truck spectrum for 1961 were the heavy-duty H-Series trucks. These trucks used modified Ford C-Series Tilt Cabs mounted high on the chassis, making them perfect for over-the-road, semi-tractor-trailer work.

Besides the new releases, Ford introduced a redesigned F-Series truck line for 1961 that featured new cabs, new front-end sheetmetal, and redesigned interiors. These trucks were still offered in traditional Flareside (separate bed and fenders) and Styleside (smooth-sided bed) versions, but the Styleside was even smoother-sided than before, as the bed was made integral with the cab.

Long a feature of the car-based Ranchero, this new Styleside bed was something new for traditional pickup trucks. However, the integrated cab and bed was only offered on two-wheel-drive Ford truck models, as the company was evidently concerned about the increased twisting stress that might occur on 4x4s.

The new Ford Falcon-based Econoline series included a short, forward-control pickup. Shown is the Deluxe version, which included rear quarter windows and extra chrome trim. The engine sat between the seats beneath a black cover.

Econoline pickup trucks had a 71/2-foot bed, placing them between the 61/2- and 8-foot beds offered on the Ford F-100 truck, and they cost about $85 less than the previously least-expensive Ford F-100. The blanked-out quarter windows identify this as a 1961 base-trim model.

As shown on this Ford F-100, Styleside pickup beds were integrated with the cabs in an F-Series redesign for 1961. Traditional Flareside beds continued to be offered as well, and both styles were available in 61/2- and 8-foot lengths.

C-Series trucks got dual headlights for 1961 to replace the quad lights used since 1958; in fact, they now looked nearly identical to the inaugural 1957 models. Tandem rear axles and a GVW of up to 51,000 lbs mark this as a CT-950.

Ranchero returned with few changes for 1961 except for the optional availability of a 170-cubic-inch six to replace the standard 144-cid unit.

A Ranchero facelift and a change in Ford F-Series cab and bed construction marked the greatest of the relatively few Ford truck changes in 1962. Continue to the next page to learn more.