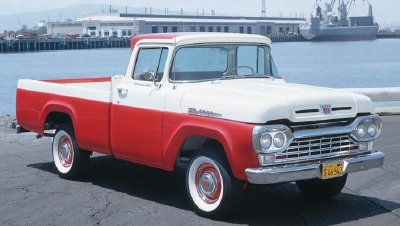 Two big events marked 1960 for the Ford Motor Company -- one the start of something small, the other an admission of failure. Introduced to great fanfare -- and great success -- was the compact Falcon, brought in to combat economy cars such as the Volkswagen Beetle.

Although GM and Chrysler Corporation joined the fray at the same time with the Corvair and Valiant, the Falcon was the top seller of the three. Dismissed after a brief run of 1960 models was the ill-fated Edsel, a car that held a lot of promise upon introduction, only to end its run as a failure of epic proportions.

Because the new Ford Falcon line included a two-door station wagon, Ford took the opportunity to use it as the basis for a smaller, lighter 1960 Ranchero truck. Sales of the car/pickup truck crossover subsequently jumped from just over 14,000 in 1959 to more than 21,000 for 1960.

Ford conventionals entered the 1960s with carryover bodies but the traditional grille change; this year's extended down to the bumper and was joined by slots in the hood's leading edge.

The restored F-100 pictured in the previous photo is powered by a 292-cubic-inch V-8, rated at 172 horsepower and shown above.

The biggest news in Ford trucks for 1960 was the small Ranchero. Shifted from the full-size-car platform it had shared since its 1957 inception, Ranchero was now based on the compact Falcon, another Ford vehicle also new for 1960.

In so doing, the Ranchero lost its body-on-frame construction and instead adopted the Falcon's unibody design. Power came from a 144-cubic-inch six with 90 horsepower; a big step down from the beefy V-8s offered in its predecessor. Economy-minded buyers took note, and sales ran 50 percent ahead of the Ford Ranchero's 1959 tally.

Ford trucks up to the F-600, shown here with a dump body, wore the 1960 light-duty Ford truck models' grille, while F-700s and larger carried over the horizontal-bar 1959 design.Ford used the Falcon's success to benefit its truck lines again in 1961 when the Econoline pickup was introduced. Get details on the next page.