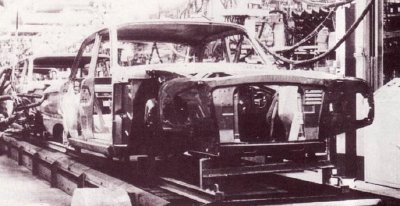 One of the key factors in Ford's ability to produce cars in Australia was its establishment of a modern assembly plant.

Before the Ford Falcon's quality gremlins made themselves known, there were remarkably few gripes from motor critics. They disliked the ultra-light, twirly steering with its five turns lock-to-lock, the brakes had only marginal capabilities, handling was average at best, and the spare wheel sited on the trunk floor robbed the already shallow compartment of valuable space.

Some assembly glitches were noted, but they were not considered detrimental, an attitude fairly typical of the "forgiveness" practiced by the media in those days. "The Falcon is fundamentally a sound, beautiful-looking car, priced right for the big section of our market," Bryan Hanrahan wrote in the November 1960 issue of Modern Motor after testing a Deluxe sedan fitted with the two-speed automatic transmission.

Hanrahan managed to coax the car up to 90.2 mph and took 12 seconds for the 0-to-50-mph sprint. By comparison, the FB Holden Special sedan the magazine tested earlier the same year achieved a top speed of 82.3 mph and needed 13 seconds for the O-to-50 run.

In August 1962, Ford released an upgraded XL series under the marketing banner "The New Falcons: Trim, Taut, Terrific!" Coming barely one month after the release of the EJ Holden range, the Falcon face-lift was a minor makeover with a new convex grille, new taillights (they were still round, just sharper looking), and the much-lauded Thunderbird roofline. Roof pressing apart, all exterior panels were carryovers from the XK.

Under the skin, some strengthening had taken place as a result of local endurance testing, though. On the options list was a larger capacity 170-cid Pursuit engine with 101 bhp at 4400 rpm. The 3.5-inch bore remained the same as in the 144-cube engine, but the stroke was lengthened by .44 of an inch to 2.94. (In a four-way test of automatic transmission-equipped cars published in its November 1963 issue, Wheels was able to hit 50 mph with the enlarged Falcon engine in just 10.4 seconds.)

To broaden the range, increase its appeal, and compete with Holden's luxury Premier, Ford introduced "the bustling new Futura," a "limited edition...designed to bring you a whole new world of luxury, sizzle and fun -- and to set your pulses pounding." The Futura was easily distinguished from its siblings by the deluxe chromed full wheel trims, chromed edge top the fake hood air scoop, fender-top ornaments, a bold chromed side spear, Futura emblems on the C-pillars, and Futura spelled out in block letters across the rear.

Inside, there were individual front seats -- not quite bucket seats as we expect them today -- separated by a raised console with a brightly chromed lid, full carpeting, and a padded top for the dashboard. The interior was done in garish red.