The Development of the Ford Falcon 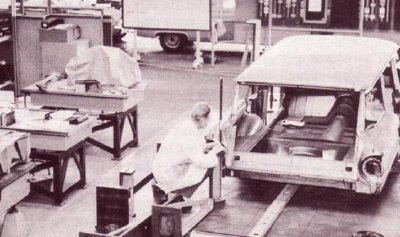 Engineers at Ford Australia's Geelong plant iron out details of the Falcon.

Rather than expand the existing Geelong plant to work on the Ford Falcon, Charles Smith chose to look for land closer to Melbourne because of its large labor pool and proximity to vital component suppliers. In 1956, Henry Bolte, then premier of Victoria state, offered Ford a 400-acre parcel of land at Broadmeadows, about 15 miles north of Melbourne, at $500 an acre.

The attraction for Ford was derived from the announcement by the government that a massive residential development was planned for the area and that labor would therefore be easy to recruit. The site was purchased in April 1957, and construction began in February 1958.

Meanwhile, back in the United States, a group of stylists in Ford's Dearborn studios was working on a restyled Zephyr, known internally as the Mark IIA, as Ford's competitor to the Holden. On July 31, 1958, Smith received a cable from Theodore Emmett, executive vice president of Ford of Canada, asking him to come to the U.S. to view progress on the Mark IIA.

When Smith saw the mock-up, he was extremely disappointed and categorically rejected it, much to the surprise of the attending U.S. executives. To him, the Mark IIA was a poor rehash of an already old design. "I need a product to match the times, a car that projects a new image of Ford," he said.

Smith's reaction was not appreciated by his colleagues. After all, he had been granted millions to manufacture the Zephyr as an Australian car, and now he was refusing to accept the product. Emmett sensed the delicacy of the situation and quietly asked Smith if he would like to view the mock-up of the new compact Ford was developing to tackle the all-conquering Volkswagen Beetle. From the moment he set eyes on the full-scale study Smith knew it was what he had in mind.

"That's the car I wanted for Australia," Smith said. "It was a new car. It had the advantage of Detroit engineering and design, and I suspected that Ford UK already had plans to discontinue the Zephyr range." (This last conclusion would prove incorrect, as it turned out.)

He immediately cabled Geelong with a simple statement: "Cancel Zephyr." The decision cost the company $137,000 to cancel already-ordered Zephyr tooling.

Learn about how Smith convinced colleagues to switch to the Ford Falcon on the next page.