Prev NEXT
Again for 1963, the Imperial that was originally planned was not what was ultimately produced. When the initial design was spirited off to become a new Chrysler, Imperial designers found themselves in a depressingly familiar Ground­hog Day scenario. Something had to be quickly done with the existing car to freshen it.
As an obvious and expedient change, the Imperial was unsentimentally shorn of its signature ringed taillights, replaced by narrow, up-and-over lenses flush with the fin edges. The new look was clean, even classy, but conventional. The bodyside molding ran unbroken around the back of the car above a new rear bumper with large round back-up lights at the outboard ends. A new grille, designed by stylist Arden Pryce, was fitted, its texture of stacked rectangles separated by a central shadow box that sheltered an eagle with upraised wings. The stand-up ornament from 1962 was retained, however, giving the 1963 front end one bird too many.

Cus­tom and Crown two- and four-door hardtops received a new roof featuring a wider, more-formal C-pillar, while the rear glass had less wraparound. The longitudinal lines in the roof panel, present since 1960, were replaced by a transverse crease aligned with the forward edge of the C-pillar, even on the LeBaron, making that roof skin new, too.

Using the new, flatter, higher-at-the-rear four-door hardtop roof panel on the two-door hardtops allowed the rear seat to be moved rearward and raised slightly, giving rear-seat passengers nearly five inches of additional leg room. The adoption of a different parking brake, acting on the rear service brakes rather than the transmission output shaft, also allowed further reductions of 2.5 inches in the height and 6.5 inches in the width of the transmission tunnel, boosting front-seat comfort and foot room. On two-door hardtops, the combined effect of these changes resulted in a notably roomier interior, important to luxury-car buyers.

The seats were remade, eliminating the high-back configuration of the driver's seat, with 23 combinations of cloth-and-vinyl, cloth-and-leather, and leather-and-vinyl trims to harmonize with the 16 available exterior colors. New standard equipment included a remote-control out-side mirror, automatic release of the parking brake when the engine was started and the car placed in gear, and power windows on all models. Not having to provide for manual window cranks permitted convenient storage compartments to be incorporated in the front doors beneath hinged armrest pads. One option making its last appearance was the $54.55 Flight-Sweep decklid. 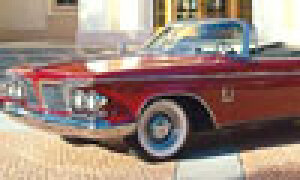