The 1960-1961 Dodge Polara/Matador had an interesting beginning. As the "Soaring Sixties" dawned, Chrysler Corporation seemed to be its own worst enemy. Design chief Virgil Exner, so masterful with the corporation's 1957 styling, had since conjured some truly bizarre things that made one wonder about the executives who approved them. Highland Park had definitely lost the tight, solid workmanship it had evidenced before 1957.

Chrysler still boasted great engines and the world's best automatic transmission, but these were no help in the 1958 recession that shriveled the medium-price market like a prune, sent buyers dashing from performance to economy, and boosted demand for funny foreign cars like a Redstone rocket. Chrysler did move with the market's swing to compacts, right along with GM and Ford, but its 1960 Valiant didn't sell nearly well enough to reverse a worsening sales situation.

Retrenchment seemed wise, so Chrysler consolidated from five divisions to two, then axed stalwart but slow-selling DeSoto at the end of 1960 -- the third major American make to disappear in as many years. That culminated a long "squeezing out" process in which Dodge moved steadily upward into DeSoto's price territory even as Chrysler moved downward. A greatly expanded 1960 Dodge line and the low-price 1961 Chrysler Newport dealt the final deadly blows.

Dodge actually stomped on DeSoto's grave for model-year 1960, moving from eighth to sixth in industry production with more than double its 1959 volume. The vast majority of this -- fully 88 percent -- was owed to the new low-price Dart, a three-series line of Plymouth-based cars replacing Coronet.

Up in the middle ranks, where Royal and Custom Royal had been, were two senior Dodges, the 1960 Matador and Polara. These shared a slightly larger, 122-inch-wheelbase platform with 1960 DeSotos and Chryslers, all newly engineered with Highland Park's highly touted unibody construction.

Keep reading to learn about the styling and sales success of the 1960-1961 Dodge Polara/Matador.

The Dodge Matador was dropped for 1961, and the Polara once again wore styling similar to the Dodge Dart.
©2007 Publications International, Ltd.

Styling was busy, bordering on gimmicky, just like 1959; there was even a new rendition of the previous year's four-pod taillights, with "rocket tubes" jutting firmly out from below abbreviated fins (though a tad higher than Dart's).

Inside was an equally jazzy dash holding a wide translucent speedometer and pushbuttons for climate functions as well as automatic transmission. Other wowie-zowie accoutrements included optional swiveling front seats and self-dimming mirror (both continued from 1959).

Such "features" tend to obscure the fact that Matador and Polara were basically sound, roadworthy automobiles. Chrysler's "Torsion-Aire" suspension, a fixture since 1957, still provided handling unmatched by any full-size car outside the corporate camp. Complementing it was the new unibody design, which made for a tighter, more solid structure than traditional body-on-frame, though it tended to transmit more road noise -- and was very rust-prone.

Engines comprised three hardy V-8s: a standard 295-horsepower 361 for Matador, and two 383s for Polara (optional on Matador) with 325 or 330 bhp. Three-speed manual transmission was standard, but most of these Dodges were likely sold with optional two-speed PowerFlite or superb three-speed TorqueFlite automatic.

Polara offered a novelty in its pillarless wagon, which also came with some genuinely useful features including two we take for granted now: hazard warning flashers and power door locks.

Still, there was no getting around the funky looks, still-suspect workmanship, or the feeling that Chrysler might not be around too long. With their relatively poor 1960 sales, senior Dodges predictably withered to just six Polara models for 1961 (leaving AMC to resurrect the Matador name a decade later).

Styling changes were good and bad. A new front end with simple concave grille and integral headlamps was nice. But the back was something else, with "reverse fins" peaking above the rear wheels, then tapering down around pod-like taillamps to form an ellipse with a lower-body creaseline.

But 1961 Darts had all this, too, so Polara's main visual distinctions were just badges and a big starlike grille emblem. Prices stayed basically pat, and you could still get a high-performance D-500 engine -- the 325/330-bhp 383 option with tuned "Ram-Induction" manifolding.

Again, though, Dodge didn't have enough of the right stuff, and 1961 Polara production ended at a paltry 14,000. Mercury's cheaper, more rational full-size 1961s sold somewhat better, while Buick, Oldsmobile, and Pontiac had nifty new styling that helped them to still-higher volume.

Not that it mattered, for Dodge was about to take a radically different tack over the next three years. 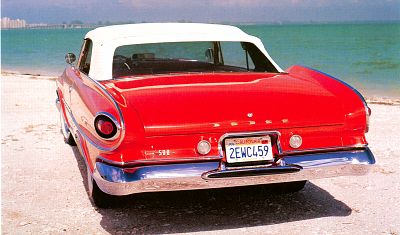 The styling of the 1961 Dodge Matador was similar to the smaller, cheaper, more popular Dodge Dart.
©2007 Publications International, Ltd.

The 1960-1961 Dodge Polara/Matador seemed like a good idea at the time, but production slowly tapered each year.