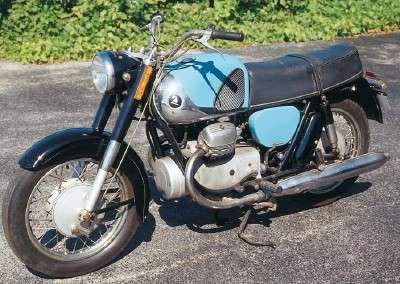 The 1959 Lilac shared characteristics with some of the bigger European bikes. See more motorcycle pictures.

The 1959 Lilac motorcycle was an early Japanese entry into the United States and unlike most of its Asian rivals, mimicked the power, design, and upscale nature of motorcycles from Europe.

While most 1950s imports from Japan were of the scooter variety, Lilacs took a decidedly more-sophisticated approach.

Aside from being one of the first "big" Japanese motorcycles sold in the U.S., Lilacs typically sported powertrain layouts resembling those of expensive European bikes.

Success with that model prompted a 350-cc flat twin reminiscent of a BMW, and later a 250-cc transverse V-twin resembling a Moto Guzzi -- though interestingly, Lilac's was introduced a good five years before those from Italy.

The combination of a small-displacement V-twin and shaft drive made the Lilac a smooth mount, though not a particularly quick one.

Furthermore, the overall design bordered on plain; engine cases and brake drums, for instance, which usually boasted fins or contours on other bikes, were smooth-faced and thus devoid of "character."

That's not to say, however, that the Lilac was lacking in style. Front fenders were skirted, seats were plush, and the fuel tank carried trendy chrome panels and rubber knee pads.

The Lilac was also equipped with an external tool box and fork-mounted turn signals, along with a speedometer flanked by a trio of warning lights.

A flat twin reappeared in 1964 with 500 ccs of displacement, again shaft driven. But by then, other Japanese manufacturers were flooding the market with less-expensive midsize bikes, and Lilac folded under the competitive pressure after 1969.

More pictures of the 1959 Lilac motorcycle are on the next page. 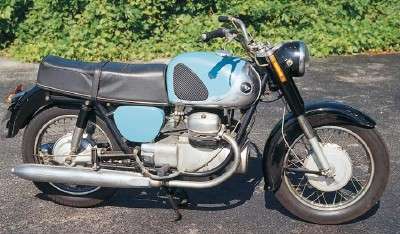 The 1959 Lilac was not known for high style, but did feature skirted fenders and a plush seat, and its engineering was very up-to-date.

The speedometer and warning lights were incorporated into the headlight bucket.
Featureless engine cases were short on character, but the technology within was clever and advanced.
Shaft drive was a rare feature in 1959; BMW was the only other major motorcycle maker with it at the time.