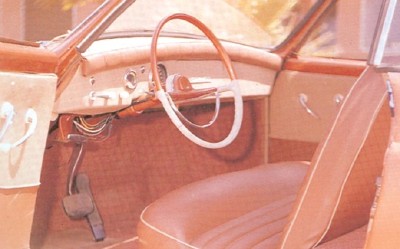 About 12 Charles Townabout concept car prototypes were built. This one had a three-place bench seat; dual buckets were planned for production.
©2007 Publications International, Ltd.

As one of the few journalists covering the electric-car scene in the late 1950s, Joe Wherry was able to provide an overview of the 1959 Charles Townabout concept car positives and negatives.

Wherry got to drive a pre-production 1959 Charles Townabout concept car and came away impressed. Stinson's craftsmanship was high quality all the way and was particularly good on the fiberglass work.

Performance was at least adequate. Though the Townabout was gear-limited to a top speed of only 55 mph, Wherry reported that performance was comparable to that of conventional small import cars of the day and that tests in San Francisco showed hill-climbing ability equal to that of large-displacement piston-engine cars.

Wherry also liked driving electric, finding it easier than a conventional car. All you did was turn a key, select "Forward" or "Reverse" motor operation, and step on the "gas." No shift or clutch to bother with, no noise to speak of -- and no engine braking, though just letting off the "throttle" slowed things down quite fast, as anyone who's driven an electric golf cart can attest.

The Townabout's interior was starkly functional. Inside were a pair of sporty bucket seats and just three instruments: speedometer, the all-important ammeter, and a "battery condition" gauge showing the amount of charge remaining.

Stinson also fitted conventional windshield wipers and turn signals but no radio, which was "not recommended" for the Townabout or most other budding electrics. Perhaps the firm had nightmares of people leaving their radios on too long and hopelessly draining the batteries.

On that point, Wherry reported Stinson's claim that using the headlights continuously decreased driving range less than 10 percent. But then, the Townabout's total range was quoted only at "over 80 miles," and that presumably meant using full power very seldom.

There were other drawbacks too, all long associated with electric cars. The included onboard charger, for example, worked off standard 110-volt current, which was convenient but required a lengthy eight hours to restore depleted batteries. And replacing those cells was a big expense in 1959 at about $260 for the four, yet they were guaranteed for only two years.

See our final section to find out if the 1959 Charles Townabout concept car made it into production.