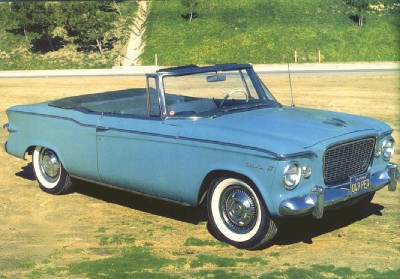 The most obvious change to the 1961 Lark was that the side chrome strip now ran above the sculptured character line.
©2007 Publications International, Ltd.

The model's first major change came for the 1961 Studebaker Lark, when the six-cylinder engine -- now called the "Skybolt Six" -- switched over to overhead valves. Horsepower shot up to 112, a boost of more than 24 percent, while torque gained a more modest 6.2 percent.

On the face of it, this new engine should have been a winner, for it suffered little loss in economy while offering greatly enhanced performance. According to Car Life, 0-60 mph could now be covered in 14 seconds flat -- a remarkable record for a small-displacement six. But there was a downside, a serious one. Cracks began to develop between the valve seats, and the resultant warranty claims -- in addition to being expensive -- hurt the Lark's reputation.

Other changes for the 1961 Studebaker Lark included an all-new dashboard, a dip in the center of the front and rear bumpers (which continued to be identical), higher-riding side trim, revised taillights, and a lower hood and rear deck.

The Lark emblem moved back to the lower left side of the grille. The sedans and hardtops also sported a flatter roof panel and revised C-pillar and rear window design.

A new model, the Cruiser four-door sedan, rode the 113-inch wagon wheelbase. It boasted four inches more rear legroom and plush trim for a modest $168 premium over the Regal VIII sedan. Regals and Cruisers also flaunted quad headlights, and the latter could be ordered with the 289-cubic inch V-8.

The onslaught of the Big Three compacts and a little-changed 1961 Lark caused output to skid 50 percent. But designer Brooks Stevens was about to work miracles on the Lark's styling -- despite a shoestring budget.

Lark sales nonetheless slumped after the good back-to-back years of 1959-1960 -- the onslaught of compacts from the Big Three saw to that. With Lark output reaching only 67,000 units, changes appeared to be in order, both in the product and in corporate leadership. By the end of 1960, Harold Churchill had been pushed into early retirement, to be succeeded by Sherwood Egbert, hotshot chief of McCulloch, the performance equipment company.

Looking for a miracle, Egbert turned to an old friend, industrial designer Brooks Stevens. With precious little money to accomplish his objectives, the new president asked for a facelifted Lark and a restyled Hawk. And he wanted them in time for the 1962 season. "On the face of it," Stevens later recalled, "the job was impossible . . .. But Sherwood wasn't an automobile man. He didn't know it was impossible."

Stevens' Gran Turismo Hawk, with its crisp, Thunderbird-inspired roofline, is a story in itself. Suffice it to note here that its introduction resulted in a 139-percent increase in sales.

The 1962 and 1963 Studebaker Lark models also went through stylistic changes. Continue on to the next page to learn about these changes.