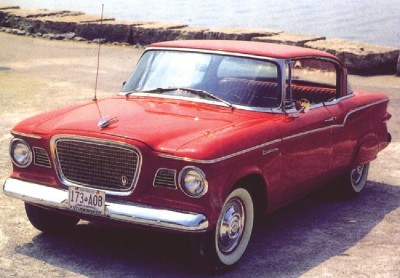 In the late 1930s, Studebaker found itself floundering financially, but the economical 1939 Champion saved the day. In 1958, Studebaker-Packard was hemorrhaging red ink, so the company gambled its future on another economy car, the Lark. It, too, saved the day -- but only for a while.

"Studebaker will be here when you're dead and gone!" scoffed one company employee when a reporter brought the news that the venerable South Bend plant was about to close.

An American institution had been lost, too, for Studebaker had been building vehicles in South Bend since 1852: freight wagons for the Union Army during the War Between the States; farm wagons for the country's expanding western frontier; "Izzer" buggies, the kind in which Grandpa courted Grandma; electric runabouts, just after the turn of the century; and, since 1904, sturdy gasoline-powered cars and trucks.

It just didn't seem possible that Studebaker was gone. And of course it wasn't, quite. Not yet. The firm's Hamilton, Ontario, plant would remain open for another 27 months, turning out Studebaker passenger cars -- albeit in limited numbers.

The company had lost $25 million on its automotive operations during 1963. Cash reserves were used up, and there was simply no way the hemorrhage could be permitted to continue. The South Bend factory had to go.

Actually, it was a miracle that the end hadn't come sooner. Or rather, a succession of miracles. Studebaker had been in receivership back in 1933, the result of President Albert R. Erskine's insane policy of paying generous dividends from capital at a time when the company -- like virtually all of its competitors -- was losing money hand over fist. A couple of miracle workers named Harold Vance and Paul Hoffman managed to turn things around for a time, but then the recession of 1938 plunged the company once more into a sea of red ink, and it was crisis time again.

Studebaker's salvation, that time, came with the April 1939 introduction of the pert little Champion. Styled by Raymond Loewy, it was a smart-looking, well-built, economical little car, competitive price-wise with the "Low-Priced Three." On the strength of it, Studebaker moved quickly back into the black. The crisis was past.

But then, after scoring a series of successes with its postwar cars, Studebaker began to slip again. From a peak of 320,884 cars during the 1950 model year, U.S. production plummeted four years later to 68,708, a drop of 79 percent.

The Studebaker Lark received an attractive facelift for 1963, but that didn't stop sales from nosediving.
©2007 Publications International, Ltd.

Studebaker posted a first quarter loss of $8.3 million, and cash reserves were down to a paper-thin $16 million. Talks with Packard got under way, culminating in the merger of the two firms in June 1954. Two years later, Curtiss-Wright Corporation, seeking a tax write-off, got into the act.

Sales picked up in 1955, though the Studebaker side of the combined operation remained deeply in the red. And then the slide began anew. By 1958, model year production had fallen to 44,759 cars, despite the introduction of a new economy model called the Scotsman. Not even in 1938 had ouput been so low; worse, the Studebaker-Packard operation lost another $13 million.

At year's end, the Packard name disappeared for good. For the last two years, the once-proud marque had been nothing more than a rebadged Studebaker anyway, much to the distress of Packard aficionados. At that point, the loss was generally regarded as a small one.

The birth of the Studebaker Lark temporarily saved the company from financial failure. Read on to learn more about this automobile.