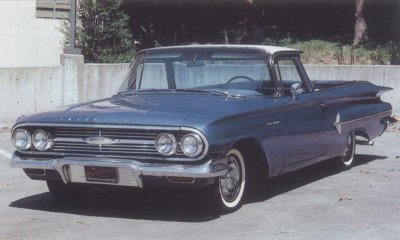 Below its beltline, the 1960 Chevrolet El Camino shared the toned-down styling of that year's full-size Chevrolets, including flatter fins and a return to a series of small round taillights, as in 1958. The license-plate mounting for all tailgate-equipped models was now below the rear bumper. This necessitated the use of special dual license lamps, but eliminated the drop-down hinge assembly used on corresponding 1959 models.

At first glance, the exterior once again had a Bel Air look, with that series' bright-metal "jet" appliqué and narrow trailing molding used to accent the rear quarters. But, like Biscaynes, the new El Camino also used narrow-band trim to fill a portion of the upper-body character line and did without a bright edge around the concave rear cove that contained the taillights.

Inside, Biscayne/Brookwood appointments also persisted (a contrast to Ford, which had offered only a Custom-trim version of its final big Ranchero the year before). The seat was now covered in striped-pattern cloth with vinyl facings. Available interior trim shades were once again gray, blue, and green. Floor coverings were in medium-tone vinyl.

Mid-1959 powertrain availability was carried over with minimal changes for 1960: The base 283-cid V-8 was detuned a bit for fuel economy and was now rated at 170 bhp, and the fuel-injected engines were officially gone.

Base prices were up very slightly, starting at $2366 for the six-cylinder model; another $107 fetched a V-8 with the two-barrel 283. However, orders plummeted by a third, to just 14,163. Meanwhile, Ford moved 21,027 Rancheros, which were now based on the brand-new Falcon compact.

The pioneering American sedan pickups just didn't connect with enough car-buying Americans. Perhaps these early "crossovers" didn't carry enough passengers; in a time when baby-boomer families dominated the market, three across was the best they could offer. The low-level trim and marketing efforts focused almost exclusively on commercial customers may have inhibited sales as well.

The basic idea was still viable, though. Ford proved it with the little Falcon Ranchero that was able to share parts with a two-door wagon and sedan delivery. (These styles faded from the full-size Chevy line after 1960.)

For a time, Chevrolet had only the rear-engine Corvair 95 Rampside pickup to offer as some competition for the Ranchero, but even then, the Rampside's true rival from Dearborn was the E-100 Econoline. It wasn't until 1964 that Chevrolet fielded a more direct competitor for the Ranchero via a revived El Camino spun off from the new intermediate-class Chevelle.

The midsized El Camino continued in production through four design generations spanning more than two decades. (It also outlasted the Ranchero, which faded in 1979.) In an unusual move, Chevrolet continued production of the last-series El Camino for four model years after the rear-drive Malibu on which it was based was discontinued in 1983. The 1987 El Caminos were the last of their kind . . . at least as of this date.

The El Camino concept remains a powerful idea today. Even though most new crossover vehicles are based on truck designs, Chevrolet has recently shown an El Camino concept car. This thoroughly contemporary "sedan pickup" remains true to the original El Camino.

Chevrolet isn't saying it will build something like it . . . but then again, it's not saying it won't. Perhaps, then, the Chevrolet El Camino has not reached the end of the road after all.