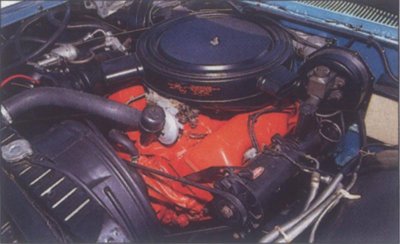 As a result of the 1959 Chevrolet El Camino's passenger-car underpinnings, buyers found that they could enjoy unrestricted access to Chevrolet's lavish buffet of available powertrains.

The 283-cid Turbo-jet V-8 with two- or four-barrel carburetion and several Turbo-Thrust 348-cid V-8s with four-barrel or triple two-barrel carbs (the latter with up to 335 bhp by mid 1959) were among the entrées. Even the 250- and 290-bhp 283-cube Ramjet Fuel Injection engines were available -- at least on paper.

Depending on the engine selected, a customer c­ould choose a three-speed manual transmission (standard on both six and V-8 models), three-speed with overdrive, Powerglide two-speed automatic, or the seamlessly shifting Turboglide automatic. A four-speed manual with floor shift was available with any of the 348s and the two fuel-injected engines.

The El Camino buyer could purchase many deluxe body equipment items -- a right-hand sunshade/appearance upgrades such as fender ornaments and other ornamental trim -- from Chevrolet's options catalog. No doubt some dealers upgraded brand-new El Caminos with even more deluxe bolt-on trim from the parts bin, both for their customers and for their own purposes.

­A nicely accessorized and enhanced El Camino made a great "parts chaser." (Only the lack of uplevel interior trim kept the original El Camino from fully realizing in 1959 the deluxe passenger-car pickup Earl and Jordan had envisioned in 1952 -- an oversight some El Camino restorers have "corrected" by adding Impala trim features.) Among the few factory accessory items denied the original purchasers of 1959 El Caminos were the "continental-type spare carrier" and Autronic Eye headlamp dimmer.

The original El Camino was something of a sensation when it first appeared. According to Arthur W. Jones, who worked in GM Styling in the late 1950s, the 1959 El Camino was so admired by designers that some of them ordered one in lieu of the Corvette they typically drove. Across the nation, and especially in California, hot rodders and customizers found the new El Camino an extremely appealing vehicle for modification.