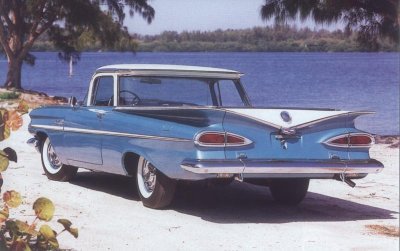 The "batwing" fins and "cat's eye" taillights of Chevrolet passenger cars were carried through to the 1959 Chevrolet El Camino.

Although Chevrolet considered the 1959 Chevrolet El Camino to be part of the lowly commercial-car model line, the exterior was dressed up a bit with midlevel Bel Air-style side trim. That included tapering full-length bodyside moldings filled with Snowcrest White paint.

"El Camino" nameplates were affixed to the front fenders in the same place in which "Bel Air" scripts would adorn a passenger car. Wide, bright moldings swept up over the side windows and rimmed the trailing edge of the roof.

Other moldings ran under the side windows and flowed right into the chromed strips that encircled the top of the pickup box. The large, curved rear window was also framed in chrome.

Inside, though, the standard three-across bench seat was trimmed in Biscayne-level leather-grain and patterned vinyl. There were no seating options. Three interior colors -- gray, green, and blue -- were available. Floor coverings were black vinyl, with colored specks molded in to match the upholstery color. (Unfortunately, moisture could become trapped beneath these mats, causing floor pans to rust as the years went by.)

1959 Chevrolet El Camino interior trim and upholstery were akin to that used on low-line Biscayne and Brookwood cars.

The El Camino's dramatic greenhouse was in essence a shortened version of the thin, flat "flying wing" roof design -- with its distinctive rear overhang -- first seen on many 1959 GM four-door hardtops. The flat roof panel and forward-thrusting rear pillars gave the El Camino a profile suggestive of powerboats of the era.

The 1959 El Camino was promoted as the first Chevrolet pickup built with a steel bed floor instead of wood. The floor was a corrugated sheetmetal insert, secured with 26 recessed bolts. Concealed beneath it was the floor pan from the Brookwood two-door wagon, complete with foot wells. Box capacity was almost 33 cubic feet.

The tailgate created a perfectly level bed extension when folded down, allowing for fully 91 inches of load length (the same as Ranchero, though its tailgate wouldn't fold quite as flat). The license-plate carrier, housed within the tailgate, was hinged to swing down when the gate was down, allowing the plate to remain visible. With no place else to go, the full-size spare tire stood in upright readiness behind the passenger-side seatback. It was partially concealed by the built-in parcel shelf behind the seat.

Being endowed with the styling of Chevrolet's 1959 passenger cars, the first El Camino shared their legendary "gullwing" fins and "cat's eye" taillamps. Each lamp unit was split into two pieces on the El Camino and other Chevy models with a tailgate. The fuel filler was located in the left rear quarter panel on these models as well. El Caminos were available in all Chevrolet colors, including two-tones.

The El Camino was built on Chevy's 1959 passenger-car chassis that featured a "Safety-Girder" X-frame design and full-coil suspension, both of which had debuted on the 1958s. The 119-inch wheel-base was 1.5 inches longer than that of the 1958 models, though. Overall length for all 1959 Chevys was up to 210.9 inches.

The El Camino's payload rating ranged from 650 pounds to 1150 pounds, with gross vehicle weights ranging from 4400 to 4900 pounds, depending on powertrain and suspension options specified.

The somewhat soft, passenger-car-type standard suspension enabled the El Camino to stand level without a load. (By contrast, the Ranchero came with stiffer heavy-duty rear springs that provided it with a standard 1100-pound payload rating and gave it a distinct "rake" when unloaded.) The quirky Level Air suspension option, in its second and final year, was listed as available, but was almost never seen on any Chevrolet model, much less an El Camino.

The El Camino boasted an array of available powertrains, which are detailed in the next section.