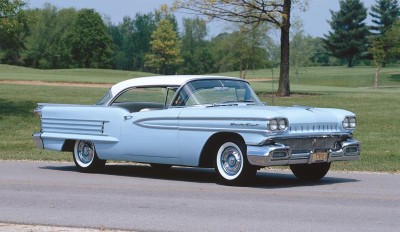 It might have been hard at the time for the loyal Olds­mobile customer to believe, but somewhere deep inside, the 1958 models, including the 1958 Oldsmobile Dynamic 88, were based on the same shells that had served the '57s. That's because the '58s had new looks from front to back and roof to road.

Styled under the direction of Art Ross, who had headed the Oldsmobile Studio since 1947, the 1958 Oldses broke with recent marque styling trends. The elliptical "jet-intake" grille of prior years was replaced by a full-width horizontal-bar grille and massive bumper. "Hockey-stick" side trim gave way to a projectile shape in front and horizontal strakes in the rear, which gave the unfortunate impression of being on a collision course with each other.

Revised roofs featured an undivided backlight, which alleviated criticism of the three-piece window used on the '57s. About the only visual tip that this was an Olds­mobile was the continued use of high-mounted, round taillights. Wheel­base was up by a half inch (to 122.5), and '58s were 2.2 inches wider than the '57s.

The anchor of the 1958 Olds lineup was the Dynamic 88 series. (Like quad headlights and optional air suspension, the Dynamic sobriquet was new.) Powered by a standard 265-bhp "economy" version of the Olds 371-cid V-8, it came in seven models, including a $2,834 Holiday two-door hardtop that drew 50,7897 orders.