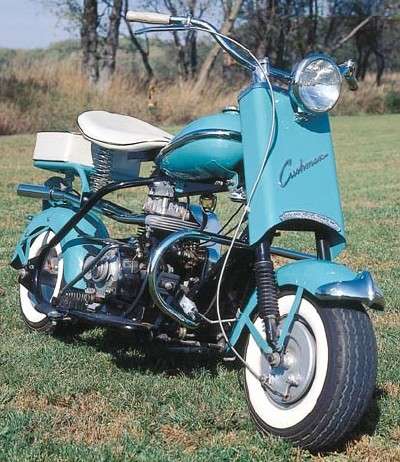 Producing its first scooters in the mid 1930s, Cushman went on to build a variety of small machines over the next 30 years, including the 1958 Cushman Eagle and CushmanPacemaker motorcycles.

Cushman was one of the few manufacturers of motorized vehicles permitted to continue civilian production during World War II, as its products were considered "energy savers" for those needing transportation to and from work.

During this time, and on into the postwar years, many a motorcycle enthusiast cut their riding teeth on a Cushman.

Cushman scooters of the 1940s were of the "enclosed" variety, with a shroud covering the engine. In 1949, the Eagle was introduced, which copied motorcycle styling themes with its "naked" engine, sprung saddle, contoured fenders, and teardrop fuel tank. Even whitewall tires were available.

Its 318-cc flathead single put eight horsepower through a two-speed transmission, the combination good for 50-plus mph.

Also offered at the time was the Cushman Pacemaker, which adhered to conventional scooter lines. Unlike the Eagle, Pacemaker used an automatic clutch and was powered by a smaller engine.

In addition to its two-wheeled scooters, Cushman built other models as well. Often seen putting around golf courses and college campuses were its three-wheeled "pickups," while enclosed versions were popular for parking enforcement.

See the next page for more pictures of 1958 Cushman Eagle and Cushman Pacemaker motorcycles. 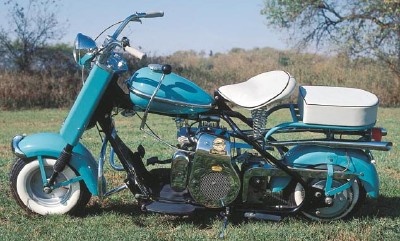 Cushman scooters, including the Eagle and Pacemaker, were considered "energy savers" and were therefore allowed to be produced for civilians during World War II.

The Eagle had a hand-shifted two-speed transmission.
This Husky engine was dressed up with a chrome cover.
Ads pitched Cushman transportation as economical fun.
The Pacemaker had a convenient step-through design.
The view from the Pacemaker's seat. Could it be any simpler?