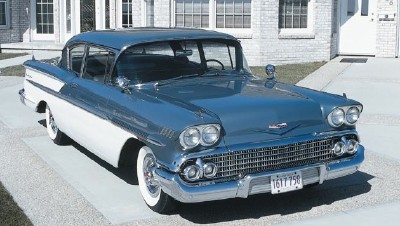 Chevrolet General Manager Edward Cole was selling optimism on the day that he revealed the 1958 Chevrolet car line to the press in early October 1957. "There i­s no reason to believe that an economy with the strength and vitality of ours will not support an automobile market in excess of 6 million cars next year," he said.

His assessment of the overall market out of the way, Cole then honed in on the part of it that was in his hands. "I am confident that public acceptance of our outstanding new 1958 line will allow us to enlarge our share of the automotive market appreciably during the next year," said the division chief.

Cole's forecasts as reported in the trade paper Automotive News proved to be half right. It turned out that the 48-year-old general manager, who had taken the reins at Chevrolet in 1956 after four years as chief engineer, couldn't see around the corners of the U.S. economy. The conditions for a recession that lasted well into 1958 were already gathering as he spoke, and dampened consumer spending would take a big toll on auto sales.

But he was on target about his products. In a model year in which every make but economy-minded Ram­bler lost ground, Chevy slipped the least relative to its '57 sales performance. As a result, it added more than 4.5 percentage points to its market share and returned to first place in the industry the year after a very rare runner-up finish to Ford.

Of course, it mattered immensely in the high-volume low-price field that the '58 Chevy was all-new, while rivals Ford and Plymouth were updates of their '57 models. (Motor Trend reported that General Motors devoted nearly a quarter-million dollars to the car's development.) The 1.2 million new Chev­rolets on the road that year were drastically changed from their cel­ebrated predecessors, bigger and heav­ier cars with fresh engineering and even new names.

Stylistically, they were one-year wonders, their look swept away in GM's frenzy for fins in 1959. But, led by the social-climbing Impala -- itself a totally new type of Chevy -- the '58s started the division on the road upmarket to solid sales success in the Sixties.

In typical Fifties fashion, this new Chevrolet was longer, lower, and wider than the one it replaced. That had as much to do with the engineer's slide rule as it did with the stylist's pencil.

Underpinning everything that was different about the 1958 Chevrolet was a new "Safety-Girder" cruciform frame. Similar in layout to the frame adopted for the 1957 Cadillac, it featured box-section side rails and a boxed front cross member that bowed under the engine. The rear was tied together by a channel-section cross member.

All frame components were welded, except for a channel-section support that ran under the transmission; it was bolted in place to allow for removal should the powerplant need service. Convertibles were given a little more "backbone" via steel plates strategically welded along much of the frame's length.