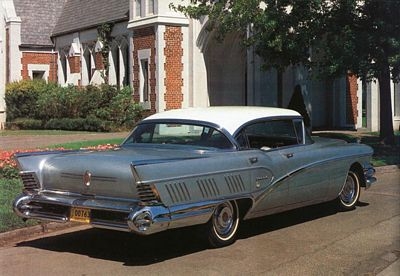 Radical changes would have to be made if the 1958 models were to achieve widespread acceptance. But therein lay Buick's dilemma, for it was much too late to bring about a major modification of the basic body contours. 1958 Buick Limited restyling efforts had to revolve around superficial differences in trim.

All of which may have been, in 1958, quite in keeping with the spirit of the times. After years of wartime austerity, stretching through the Korean conflict as well as the Second World War, Americans seemed determined to let it all hang out. It became the era some sociologists have called the "Age of Excess." "If you've got it, flaunt it" seemed to be the slogan.

Perhaps the 1958 Buick overdid it, but this was, after all, the era of high-flying tail fins and three-tone color schemes.

Engine specifications remained unchanged for 1958. With a 9.5:1 compression ratio and two-barrel carburetor, the Special developed 250 horsepower. All other series, using a 10.1:1 squeeze and four-barrel carb, trotted out 300 horses -- exactly the same as Ford's new four-place Thunderbird.

A revised automatic transmission debuted for 1958: Flight-Pitch Dynaflow. Known in later years as the "triple turbine" transmission, it came standard on the largest Buicks, but was optional throughout the balance of the line. An enormously complicated mechanism, it proved to be very expensive to produce. Buick is said to have spent $86 million just on tooling for it.

With a maximum stall ratio of 4.5:1, the Flight Pitch relied entirely on hydraulic multiplication throughout the car's speed range, resulting in almost incredible smoothness. On the downside, however, it lacked the quick response of Hydra-Matic, and slippage was such that it proved to be wasteful of fuel.

In the next page, continue learning about the Limited's transmission and find out about its optional Air Poise suspension.