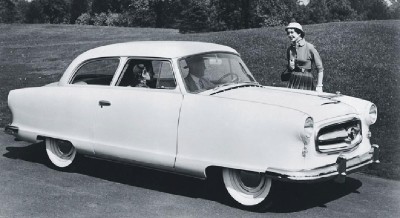 Car buyers likely thought they had seen the last of the 100-inch-wheelbase Nash Rambler in the mid-1950s -- until AMC used it to create the Rambler American.
©2007 Publications International, Ltd.

To get an idea of how the 1958 Rambler American styling would look, engineers produced a mock-up. According to Chapin, they expedited this by buying a second-hand 1955 Rambler from a local dealer to serve as a concept car.

Styling director Ed Anderson put his men to work on revising the small Rambler. As the tooling budget was very tight, the basic car had to remain the same, with essentially all major under-the-skin stampings unchanged. There was enough money to restyle some of the exterior, but even there changes were limited.

Basic fender shapes couldn't be drastically altered. However, since fenders, hoods, and decklids are produced by a series of stamping operations, minor changes in tooling and processing could be made to affect the appearance of the finished product. Thus, even though the hood, decklid, and roof panels were redone, the original dies were used.

Anderson never liked Nash's enclosed wheels so he was happy to open up the American's wheel wells. The fronts had been opened up on the 1955 models, so all designers had to do was restyle the rear fenders, making sure to incorporate a trailing rear edge -- one of Anderson's favorite style marks.

Frontal styling was modified with a handsome new mesh grille in place of the previous eggcrate pattern. The hood scoop and bulky "flying lady" ornament of the past were deleted, the later replaced by a simpler "wind split" ornament, and the chrome molding along the rocker panels was deleted. A flatter roof panel delivered a lower look in profile, and the "greenhouse" was further modernized via a larger wraparound rear window. Deleting the decklid's raised "spine" provided a smoother appearance.

AMC dusted off the tooling of the old Nash Rambler, made a few styling updates, and reintroduced its little car as the Rambler American.
©2007 Publications International, Ltd.

Chapin took credit for another element of the American's restyling: He suggested turning the elliptical 1955 taillamp bezels upside down so that the red lenses were now above the chrome-encased reflectors. This, too, achieved a slightly different appearance with no cost in tooling.

The decision was made to call the new car the Rambler American, since dubbing it just a Rambler might cause confusion in buyers' minds considering that was already the brand name in use for the larger AMC cars. Although the earlier Nash Rambler had offered several two- and four-door body styles, Romney worried about cannibalizing sales of his larger, more profitable senior Ramblers so only one body style was planned. To keep costs to a minimum -- and to focus on entry-level buyers -- the American was introduced solely as a two-door sedan, a style that first appeared on the little Nash in 1954.

The American wasn't introduced to the public until late January 1958. Hoopla was kept to a minimum, but an eight-page brochure proudly proclaimed that the new car was "Here By Popular Demand." AMC focused on the Rambler's basic appeal: "[T]his is the one car that the modern American demands ... a car that combats rising operating and maintenance costs by giving more miles per gallon of gasoline with lowest maintenance costs ... a car that is easier to park, garage and maneuver in traffic."

Romney explained the thinking behind the concept: "Essentially, it was simple: Let's build an automobile for the American people that appeals as much to their native intelligence as to their ego." Naturally, economy of operation was highlighted; after all, the Nash Rambler, "America's Economy King," had won the Mobilgas Economy Run more often than any other make.

For more on the 1958 Rambler American, continue to the next page.