You'll get some argument as to whether the 1958-1959 Rambler American is really a "great" car of the 1950s. Plain, unimposing, and dull, it was anachronistic even when new -- which is precisely why it fascinates today. For this was the first -- and so far only -- instance when a U.S. automaker dared resurrect one of its old models.

The car in question was the original Nash-designed, 100-inch-wheelbase Rambler of 1950-1955. For a time, its bigger and bolder 1956 replacement seemed sufficient to see American Motors (heir to both Nash and Hudson) through the rest of the decade at least. But AMC president George Romney had noted the growing popularity of small economy imports.

When a recession began making itself felt in 1957, he decided that AMC might need a smaller, budget-priced car of its own to compete with the foreigners at the bottom end of the market.

Alas, neither time nor money allowed for an all-new design. AMC was busy making its sensible 1956-1957 Rambler somewhat less so for 1958, and readying a stretched Ambassador version to replace the moribund big Nash and Hudson. But Romney, nothing if not a maverick, had an idea: Why not just take the little Rambler out of mothballs?

Reviving an obsolete design was unheard of in those days (and still is, come to that), but it made sense. AMC still had the original Nash tooling, and it had long since been paid for. This allowed the firm to field its import-fighter quickly and cheaply, which promised handsome profits even with low list prices.

And the size slotted in perfectly: a bit bigger than the top-selling foreigners, smaller and thriftier than anything offered by the Big Three.

When the recession deepened, Romney put the rush on his new/old car, which arrived late in the 1958 model year as the American. The name was right, too: a patriotic pitch to those cash-short buyers who'd plunk for a domestic econocar where given a choice.

To find out how Rambler handled the styling and engine of its revived model, keep reading on the next page. 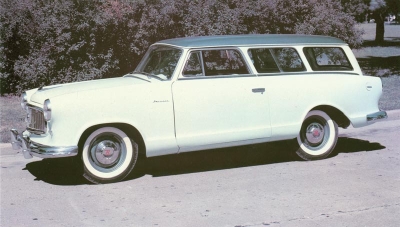 The 1958-1959 Rambler American was actually a reprisal of an early 1950s Nash model, rushed into production to fill a gap in AMC's product line.