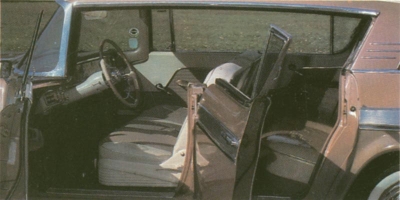 Nash, and then its successor American Motors Corporation, had long led the way in automotive heating, ventilation, and air conditioning, which were put to use in the 1958-1959 Rambler Ambassador. For 1958, a fully integrated version of the famous "Weather Eye" factory system debuted. Yet another industry first was the new "deep-dip" rustproofing given all AMC cars before painting.

Dunking their bare body/chassis structures in a big bath of special chemicals was claimed to forestall the dreaded tinworm, which can wreak earlier and more damaging havoc to unit-body cars (another Nash/AMC tradition) than body-on-frame construction.

Road-testers gave generally high marks to AMC's new "big one," calling it surprisingly quick, decently roomy, fairly luxurious, and not nearly as thirsty as the outsized Detroiters that AMC president George Rornney kept calling "dinosaurs." It was even fair value at prices in the $2,500-$3,100 range.

But the public literally didn't buy any of this. Though Rambler was one of the few makes to tally higher volume in recession-wracked 1958 -- reaching a record 217,000 units -- only 1,340 of them wore Ambassador nameplates, according to one source (another with production listings by wheelbase suggests that output hit 7,000 units, probably more likely).

The story for recovery 1959 was much the same for AMC as output continued to climb and the corporation enjoyed a record $60 million profit. But AMC didn't separate Rambler/Ambassador production that year, although the proportion likely was about the same as in 1958, with the small American and the Six/Rebel again garnering the vast majority of sales.

Though the Ambassador would survive all the way through 1974, it would always be too much like mid-size AMC cars to attract much of a following -- and rather stuffy in the bargain. In that sense, it was very much like the Nash whose name it inherited, a car with little place in an age when it definitely wasn't hip to be square.

Check out 1958-1959 Rambler Ambassador specifications on the next page.