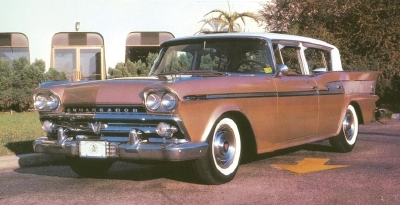 The added length up front on the Ambassador made for nice dimensions. See more classic car pictures.
©2007 Publications International, Ltd.

Nash and Hudson saw more setbacks than successes in the postwar years, prompting the shotgun wedding that formed American Motors Corporation in 1954 and would eventually lead to the 1958-1958 Rambler Ambassador. The car was named after Nash's best, keeping alive the spirit of those two once-great nameplates the year after they were dropped from AMC.

As something of a rush job, the Ambassador simply borrowed the 1958 Rambler's restyled bodyshell, but spliced in an extra nine inches ahead of the firewall for a 117-inch wheelbase. The resulting longer hood made for better proportions, but nobody was fooled into thinking this was anything other than a gussied-up Rambler.

Still, AMC stylist Ed Anderson did a good job in reskinning the basic unitized structure of the 1956-1957 Rambler. Aside from hood length, grilles, taillights and such, Ambassadors and Ramblers shared the same square-lined appearance, relieved only by trendy canted tailfins that seemed quite modest compared to the wings sprouting elsewhere. Grilles, by the way, were die-cast, not stamped -- more expensive but more durable too.

All 1958 AMC models came with four doors, except for the reborn 100-inch-wheelbase Rambler Americans. Ambassador -- marketed as a separate make, not a Rambler -- offered a single series comprising sedans and Cross Country wagons in Super and Custom trim, plus a pillarless Cross Country and a Country Club hardtop sedan, both Customs.

Befitting its higher station, the Ambassador carried AMC's new 327-cubic-inch V-8, with higher compression adding 15 horsepower to the 1957 figure. Rambler Sixes went up 3 horsepower, to 138, while the 250-cubic-inch Rebel V-8 also got a tighter squeeze and switched from two- to four-barrel carburetion for a gain of 25 horsepower to 215.

A safety-minded padded dashboard was on the options list for Ambassador buyers.
©2007 Publications International, Ltd.

Otherwise, these cars were much like AMC's 1957 products, though there was no lack of technical change. For example, optional GM Hydra-Matic got the boot in favor of Borg-Warner's new three-speed "Flight-O-Matic" transmission, complete with Chrysler-style pushbutton controls (in a panel to the lower left of the steering wheel).

The all-coil suspension went basically unchanged, but rear shocks got revised rates, wheels shrunk an inch to 14, and a front anti-roll bar was made standard for Ambassadors and optional on Ramblers. "Power-Lok" limited-slip differential was a new $40 extra, and a Ford-style safety package (padded dash and sunvisors) also joined the options list. AMC even got in on the air suspension fad with an optional rear-only setup, though few buyers ordered it.

To learn about technology used in the Ambassador, keep reading on the next page.