by the Auto Editors of Consumer Guide
Next
Oldsmobiles weren't raced much by 1957 and didn't need to be, having become consistently good-selling medium-priced cars known for innovation, as with the 1957 Oldsmobile Super 88. Even so, one Lee Petty and his son Richard drove Olds convertibles on the sands of Daytona and hardtops at other stock-car venues. And if a little heavy in street form, a '57 Olds could still be quite rapid with a new performance option called J-2.

Classic Convertibles Image Gallery
Available for any model at just $83, the J-2 included a trio of two-barrel carburetors, plus higher compression and low-restriction air cleaner to take the 371-cubic-inch "Rocket" V-8 from 277 stock horsepower to 300 -- good for 0-60 mph in under 8 seconds. There was also a racing setup with radical camshaft and heavy-duty internals, but at $385, it was seldom ordered. The J-2 added spice to an Olds lineup that didn't look new but was. Basic appearance and even wheelbases stayed the course of 1954-56, but bodies were two inches lower and longer, so styling was a bit more rakish. Olds turned 60 in '57 and celebrated by adding models, including a convertible to the base Golden Rocket 88 series to join a Super 88 and Starfire 98. The last sold best despite costing the most ($4217), attracting 8278 orders. Next came the Super ($3447) with 7128 sales, followed by the 88 ($3182) with 6423. Any '57 Olds made a fine road car, though switching from 15- to 14-inch tires -- an industry trend that year -- was more for appearance than handling. Yet even a ragtop looked good only until a '57 Chrysler pulled alongside. Olds styling had become dated, and it would only get worse before it got better. 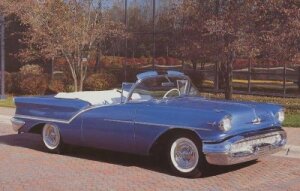 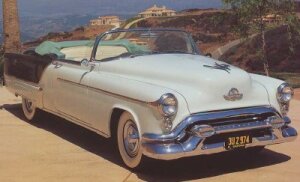