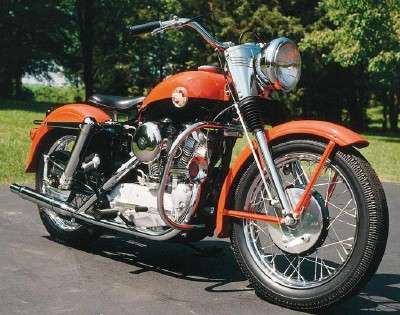 Like the slower, older K-series motorcycles, the 1957 Harley-Davidson XL Sportsters had their shifters and drive chains on the right-hand side. See more motorcycle pictures.

With the K series introduced in 1952 getting a lukewarm reception -- not to mention regularly beaten by smaller British twins -- Harley-Davidson had good reason to introduce the Sportster.

With overhead valves topping a 55-cubic-inch V-twin, the Sportster lived up to its name, proving somewhat quicker than its predecessor.

Save for its overhead-valve engine, the Sportster looked similar to the final KH models -- because it was. Telescopic front forks and swingarm rear suspension carried over, as did most styling elements save the two-tone paint treatment and tank badge.

Even the engine's primary case looked familiar, the new one differing only in that it had "SPORTSTER" cast into its side.

Like the K-series bikes, Sportsters had their shifters and drive chains on the right, whereas Harley's big FLs had them on the left.

In the case of the shifters in particular, this might seem odd, as riders moving up would have to learn to shift with the other foot. But the XL was mimicking British makes, which were its intended target.

Continue to the next page to see more 1957 Harley-Davidson XL Sportster pictures. 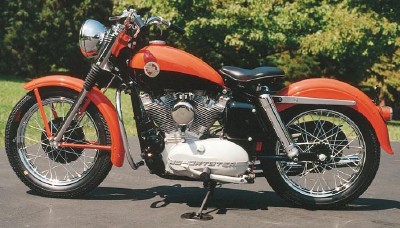 The 1957 Harley-Davidson XL Sportster motorcycle featured an overhead-valve engine, telescopic front forks, and swingarm rear suspension. It located its shifters and drive chains on the right side, British-style.

The XL instruments consisted of a simple speedometer, while oil pressure and generator warning lights were built into the headlight housing.
Backing the headlight was a chrome fork cover similar to that used on Harley's big FL models.
Harley spotters knew from the cylinder barrels and heads that this wasn't a KH engine.
"SPORTSTER" cast into the primary cover announced to all that this was no KH.