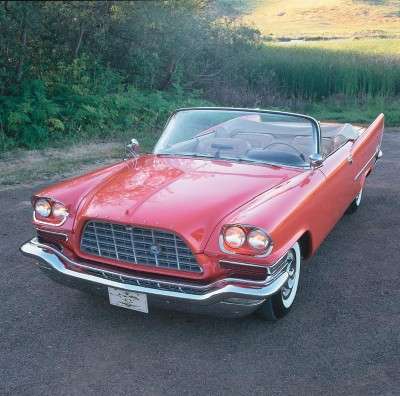 The 1957 Chrysler 300-C convertible, the third in the series of "letter cars" that ran from 1955 to 1965, had the benefit of being the first to display some new styling and engineering features. The result was what Chrysler termed "America's Greatest Performing Car."

There were a number of good reasons in Larry Jett's mind why he should have said no to the suggestion that he buy the car seen on this page. Apart from the financial ones, there was the fact that the engine wouldn't turn over and everything else on the 93,000-mile car "would need replacing, refinishing, repainting, replating, or reupholstering." He even disliked the paint color.

The second stage of styling director Virgil Exner's "Forward Look" brought low beltlines and tall, wedge-shaped tailfins to all Chrysler marques. A trapezoidal grille opening with an eggcrate texture (that was further subdivided into smaller rectangles) gave the 300 a unique face among Chrysler-brand models. Side trim was uncharacteristically restrained for the era: a short chrome spear on the rear-quarter panels and a new circular red, white, and blue series badge. Quad headlights were available for the first time, where legal. Five single-tone paint colors were offered on 300-Cs (though some special-order colors are known to have been sprayed). Leather-upholstered interiors were available only in tan.

A $5,359 convertible was new to the 300 catalog, joining the $4,929 two-door hardtop. Both rode a 126-inch-wheelbase chassis that was now suspended in front by Torsion-Aire torsion bars that delivered superior handling. Underhood was a Fire­Power V-8 newly enlarged to 392 cid. With dual four-barrel carburetors and hemi­spherical combustion chambers, it made 375 bhp in standard tune and could send a 300-C to 60 mph in 8.4 seconds or less. Larry Jett bought this Gauguin Red convertible in March 1995 at what he terms an "auto pawnshop" in San Francisco. To pay for its restoration, Jett, a veteran collector of Chrysler Corporation cars from Newark, California, sold a 1957 DeSoto Adventurer.

Jett's 300-C, one of just 484 convertibles made for 1957, was named the most elegant postwar open car at the 1997 Hillsborough Concours d'Elegance. It has also been shown at the Pebble Beach concours.