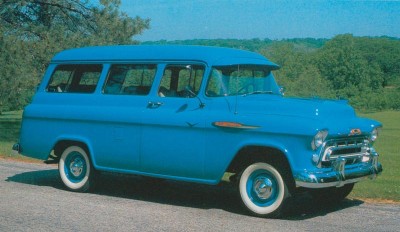 The 1957 Chevrolet 3106/3116 Suburban Carryall traced its roots to a model first introduced in 1935 and at the same time, had some elements of what we'd recognized today as a sport-utility vehicle.

Chevy's 1935 Carryall predated the modern all-steel station wagon by over a decade. Back then, it was nothing more than a panel delivery truck with windows in place of solid panels.

Still, it was all steel, and a lot easier to maintain than the conventional woody wagons of the time. The Carryall continued as Chevy trucks evolved from single-purpose workhorses, to civilized transportation in the mid-1950s, to upscale Chevrolet Suburban SUVs in the 1980s, but they always remained truck-based.

The hood was flattened and given two longitudinal bulges, which could be decorated with twin windsplit ornaments, much like the 1957 passenger cars. A big "bowtie" emblem above the grille, elongated oval fender badges, and oval taillights added to the stylish appointments.

Passengers climbed into a Suburban via concealed "Safety Steps," which had replaced the old-fashioned running boards still used by some competitors. Covered, the steps stayed a lot cleaner, and free of snow or ice.

Although Chevy's new 283-cid V-8 was optional on the Sedan Delivery, other light-duty trucks made do with the Trademaster 265 V-8, which cost $113 more than the standard six. The usual choice of five transmissions was offered.

Chevrolet marketed two Suburbans in 1957. Priced equally, the 3106 (shown here) had "panel doors" at the rear, while the 3116 had a wagon-type tailgate.