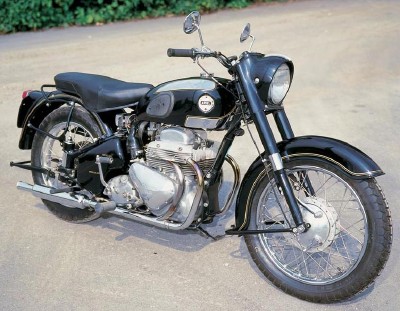 The 1957 Ariel Mk II motorcycle was developed by one of the British motorcycle industry's more adventurous manufacturers. Begun in 1902, Ariel produced an array of singles and twins of both two- and four-stroke design, but it is this unusual four-cylinder model that is perhaps best remembered.

During the 1920s, Ariel's Edward Turner had dreams of changing the world of motorcycling. For many years, twin-cylinder engines were the powerplant of choice, but Turner had grander ideas.

Envisioning a four-cylinder engine that would fit neatly into a typical frame, he devised the unusual "square four" design. It used two crankshafts geared together and four cylinders arranged in a square pattern, with a pair of pistons tied to each crankshaft.

In 1953, the Ariel 4G Mk II version appeared, carrying a four-pipe exhaust system and an alloy block in place of the previous iron version.

Some other changes were evident by this time as well. The tank-mounted instrument panel was eliminated and the gauges were now mounted atop the wide headlight nacelle.

A new plunger rear suspension provided a softer ride but needed fresh lubrication every 250 miles. The girder front fork had been converted to telescopic in 1946 and went largely untouched.

Turner left Ariel to join Triumph in the mid 1930s, where his talents in developing the Speed Twin helped revive the ailing concern.

Ariel's success with the Square Four continued through the 1950s, after which the company concentrated on medium-displacement two-strokes that were a cross between a scooter and a motorcycle.

Go to the next page to see various photos of the 1957 Ariel 4G Mk II motorcycle. 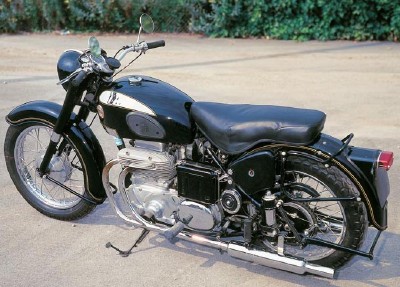 The Square Four originally had only two exhaust pipes.

The engine of the 1957 Ariel 4G Mk II motorcycle used the "square four" design, which consisted of two crankshafts geared together and four cylinders arranged in a square pattern, with a pair of pistons tied to each crankshaft.

Instruments were at the top of the headlight nacelle.
The 4G Mk II featured a plunger-type rear suspension.