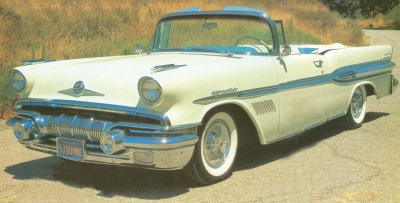 The first production Bonneville bowed in early 1957 as this Star Chief-based convertible, the most sporting Pontiac in history.
©2007 Publications International, Ltd.

With such minuscule production, the 1957 Pontiac Bonneville could never make money. But it was never intended to. This was an image-builder. In Pontiac: The Postwar Years, authors Jim Dunne and Jan Norbye accurately describe it as "Pontiac's first attempt [at] a car for a small but glamorous market segment, a direct competitor for the letter-series Chrysler 300 and DeSoto Golden Adventurer."

It certainly looked the part. Built on the Star Chief's 124-inch wheelbase and offered only as a ragtop, the 1957 Bonneville wore whitewall tires with triple-spoke "spinner" wheel covers, plus anodized-aluminum gravel guards along the lower rear fenders and a big chrome bullet within the rocket-shaped bodyside molding that came with this year's restyle of the 1955-1956 bodyshell.

But what really set the Bonneville apart was a larger V-8 with Rochester fuel injection, a pet project of new division chief engineer Elliot M. "Pete" Estes. ("Fuel injection" was written in large chrome letters on the deck and front fenders, underlining the importance attached to this feature; oddly though, the Bonneville bore no Pontiac nameplate!)

The 1957 Bonneville's fuel injection was a mechanical, continuous-flow type conceived by General Motors Engineering and engineered for production by Harry Barr and Corvette wizard Zora Arkus-Duntov. It was similar to that year's "Ramjet" system introduced at Chevrolet, with fuel and air meters on a special manifold instead of the normal carburetor and intake manifold.

Both squirted precise amounts of fuel directly into each port, but the Pontiac system was tidier, with a cast manifold header, combined (instead of separate) manifold heater and pipes, and a lower-mount fuel meter.

See the next page for more features of the 1957 Pontiac Bonneville.