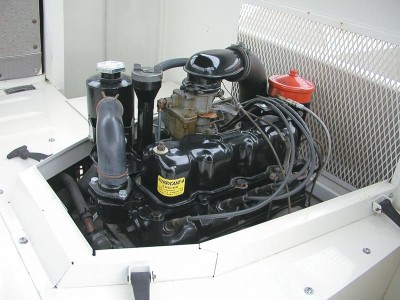 A three-speed manual transmission was standard, with overdrive and a four-speed gearbox available.

For 1958, a year in which Willys Motors profits rose to $6.8 million, the Jeep FC-150s got wider axles and revised springs for improved handling. In 1959, the company added the Ottawa backhoe to FC's optional equipment offerings. The device could be mounted on an FC at any of Ottawa's three facilities or could be ordered as a dealer-installed kit.

During the year, the FC's engine doghouse was revised to address some cooling problems. Also appearing in 1959 was a new heavy-duty FC-170 DRW with dual rear wheels. With a beefier rear axle and six-lug split-ring wheels, the DRW could haul a two-ton load.

The FC was put to the test in numerous ways. Aircraft manufacturer Boeing purchased a 150 "Fire and Rescue" truck for its Wichita, Kansas plant. Some companies purchased FCs for yard engines to jockey trailers around storage facilities. Several owners had camper bodies installed on their FCs, and there were even fleets of FC-150 ice cream trucks!

During 1960, a railroad ordered a fleet of Forward Control trucks outfitted to ride both on and off the rails. To attract the attention of farmers and ranchers at a livestock fair, one San Antonio, Texas, dealer loaded up a 170 with 84 bales of hay weighing 4,600 pounds.

At some point, Willys investigated offering a Ford V-8 as an option. The V-8 promised greater hauling capability; in one Jeep styling sketch, an FC was pictured as an over-the-road truck pulling a large trailer. The company also reviewed a proposal by Brooks Stevens to create a small van on the FC chassis. To demonstrate its versatility, Stevens commissioned the building of a lovely concept vehicle. Although it was very attractive, Willys choose not to put it in production. Apparently a midrange FC-160 model was also considered but not produced.